Tear It All Up!

Here's the conclusion of our multi-part post on paper tears.


It was shot with a still camera, photoshopped like mad and ultimately composited. There's a Flash version which simply pops from no rip to fully open for bandwidth sake. The swf file for a banner ad needs to be below 30k so its an exercise in economy.

While looking for our Infor ad on the Wall Street Journal, I found this article about Disney's new hand drawn feature film, "The Princess and the Frog". 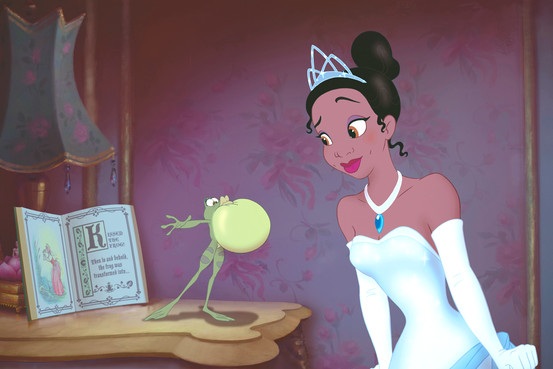 The article estimates that the film costs about $150 million to produce and that's in line with CG fare as well.

Pardon my French, but HOLY FRIKKIN COW PEOPLE!  I have no doubt that the production value is terrific and infants will love it -but $150,000,000!  How much paper are they going through on this project.

That budget, I'll add, does not include overhead or marketing.  Are the animators getting paid $1000 a foot?  Even so, that's only $8.1 million dollars tops.  Considering that I was taught to target 10% - 15%
of a budget for the "lead" animator Disney must be paying upwards of $2000/foot to their guys.


Here's an idea for Disney, if they really want to make a profit, forget these grotesque behemoths and contract 20 films for $7 million apiece.  Look at the cash those Tinkerbell movies rake in.   Heck even, "The Triplets of Belleville" made $7 million in its modest theatrical release.  Can "Brother Bear" claim to have recouped its budget?

Not only are these studios being run by men of questionable creative merit, their business decisions don't even make sense.
Posted by roconnor at 7:23 AM

It'll be worth every single cent.

I don't think the production on The Princess & the Frog cost $150 million. (maybe something else drove up the costs, but it wasn't animator wages) .

Animators and clean-up artists were making MUCH lower wages on The Princess & the Frog than on previous Disney films from the mid-90's to 2003 when the traditional animation department was shut down.

Disney is always very secretive about actual production budgets, but early on I had heard that they were trying to keep the budget down on POTF to about what "Aladdin" cost to make in 1992.
(which was in the $50 - 60 million range , if I recall , although some quick googling shows two different sites reporting the Aladdin budget as $28 million, but I'm sure that's wrong. No way was Aladdin made for $28 million.)

My guess ? I think the POTF production budget was somewhere in the $60 to $80 million range.

Where is the WSJ getting that $150 million figure ?

If the film's production budget actually swelled up to $150 million then someone is not doing their job. There is no way it will recoup that cost during it's theatrical run (using the standard formula of 3x the production cost to cover the marketing and other associated costs , so it would need to make $450 million at the box-office to break even !)

" Can "Brother Bear" claim to have recouped its budget?"

"Brother Bear" was made at the smaller, more efficient Orlando, FL unit. (in a right-to-work state with lower wages overall) The production cost was $80 million.

It's done well on DVD sales and popular enough to warrant a direct-to-DVD sequel which also sold well.

There's an enormous well of waste preventing these big films from being made efficiently. The creative fallout from that is as evident as the financial.

There's no point in arguing over the amount of waste when it's so extravagant.

Even $50 million is, generously, 5 times what a film like "Brother Bear" or, to cite the best of the bunch "Mulan", should cost.

Better business is to make 1 "Mulan", 1 "Brother Bear", and 3 other films with distinct voices.

International is too fungible to be reliable.

If "Brother Bear" made back its production cost on domestic release, bully for it. That would mean it cost less than $90 million.

Imagine the success it would have bred if it cost a mere $10 million.

And, yes, DVD sales on animated films are ALWAYS popular.

Some films (Richard Rich, eg) use theatrical releases as advertising loss leaders for the video releases.

There should be even more adventurous choices made for direct-to-DVD films -since they can be done on near TV budgets and can easily recoup their costs.

Production costs stopped making sense a long time ago. It's like this with everything. Construction costs, when you factor in true cost of materials and labor and even account for waste, never balance to what the developer says the cost is.
Hidden costs are everywhere but nothing ever adds up. I don't know what talent is voicing the movie, but that obviously adds to it; executive featherbedding, no doubt. Is repayment of producers' investment or bank financing included? I didn't see where the estimated production costs didn't include overhead or marketing, but this may be a standard of which I am unaware.
I'm just glad that they are doing it "old school" and that John Lasseter realizes that what people don't want to see is a bad movie.
I also know I'll be taking my daughter to see it this year and we'll own the DVD next year.

Industry standard is to exclude marketing and physical plant as well as duplication and print distribution costs from production budgets.

There are a number of reasons for this. A big one is to keep films in the red as long as possible. Financing is secured based on production budgets. Say $150 million.

Investors are secured and their investment only makes a return once a picture turns a book profit.

That's where "marketing and distribution" comes in. Studios can then quadruple the production cost by charging these to the film.

You may remember Peter Jackson's suit against New Line regarding Lord of the Rings. This is what that was about. New Line was claiming the film didn't make any money, and based on their bookkeeping it didn't. The court, however, ruled they were cooking their books.

My old boss's lawyer was a longtime film attorney for many New York producers (including Woody Allen). He claimed that in his four decades of practice only one film ever "made" money (what we refer to as "back end") -"The Blue Lagoon". "They just couldn't find a way for that to lose money".

All of that goes to show that film financing is a murky business (Sony found this out the hard way in the 90s).

Disney may spend $150 million on its films -but in my view, as someone who makes films and deals with their costs -that's beyond extravagant.

Then I'm going to go with the dartboard theory and a "race to the top" mentality between studio heads. "Oh yeah, you think you overpaid for that flop, just watch this!"

They probably then find ways to shovel money out a window while screaming at everyone to keep costs down (a la Tom Cruise in Tropic Thunder channeling Jeffery Katzenberg).

Love the blog, keep up the good work.