As you've probably heard, Sesame Street is celebrating it's 40th Anniversary this week.

While the program's impact on education has been debated, it's influence on animation can not be contested.

Here's an article from an October 1976 "TV Guide" entitled "Has Sesame Street Really Done Any Good?"

A title like that is why I love language. Can there be any other answer than "Of course not! Harumph!"? 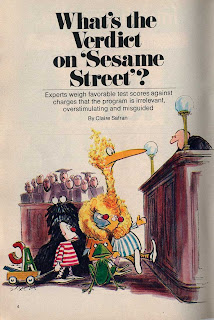 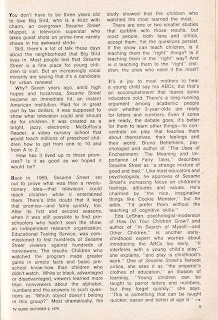 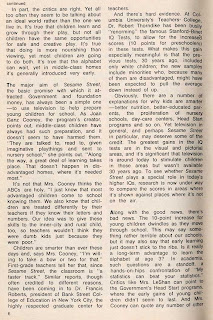 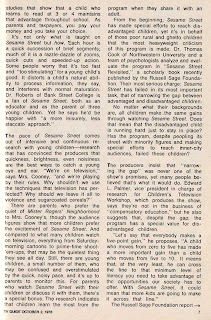 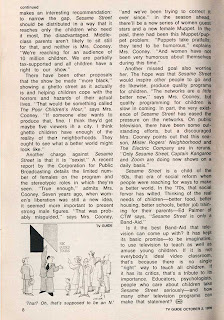 On this last page Joan Ganz Cooney makes a few terrific statements. Here's the pull from the article:

"There have been other proposals that the show be made 'more black', showing a ghetto street as it actually is and helping children cope with the horrors and hazards of their actual lives. 'That would be something called The Poor Children's Hour,' says Mrs. Cooney. 'If someone wants to produce that, fine. I think they'd get maybe five viewers in a city. I think ghetto children have enough of the reality of their neighborhoods. They out to see what a better world might look like.'"

TV Guide, not surprisingly, looks to television to educate children. Clearly that's foolish. What Sesame Street offers is television which, at the very least, doesn't make you dumber.
Posted by roconnor at 4:23 AM

Al Capp wrote something somewhere decrying 'Sesame Street'. I think he was just jealous that TV was taking his audience away.

Puppeteers generally give their characters a life "off set", as though the muppets are just actors playing the role of "Cookie Monster" or "Telly".

I'm there are underground tapes of Grover's drunken benders.