Once the E-Z post 9/11 credit dried up and very few were willing to drop a million plus on an ugly condo two stops from Manhattan, all the Bloomberg re-zoning East of the Hudson (and all of his horses and men, to boot) couldn't finish all the construction begun in the era of low interest rates.

Two years ago I counted seven (7) construction sites on my direct walk to the L train.  All 7 were confined to the three blocks between Borinquen and Metropolitan -formerly zoned as industrial.  If we were to expand our count by a single block East to Union Avenue, this span would have recorded an additional four or five building sites. 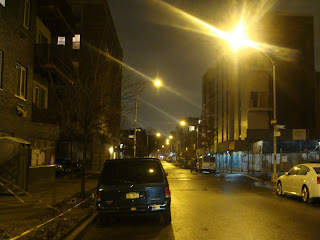 Today I noticed an "open house" at one nearest to the subway.  The construction remains in progress.  Only one site is actually housing residents, that opened several months ago and still seems at partial capacity.

The positive to this positive waste (no, not the Pyrrhic victory of desolation over greed) is the permanent reminder wheatpasted to a "post no bills" wall. 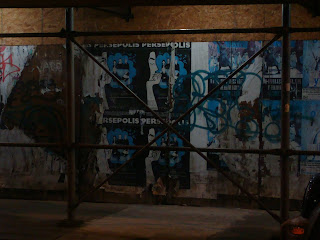 I hope these posters for "Persepolis" stay up forever.  It's going on two years since they first appeared.  The cat walk construction has protected them from the elements, so they remain pretty well preserved.

It happens the film also screened on cable last night.

The film holds up after two years.  No screening could compare to the impact of the first, when I watched it sitting next to two children of Iranian parents who's sisters, cousins, aunts, and mothers shared the story.  Out of that context it remains a powerful film -and one of the few instances when the animation design exceeds the illustration of the original comic book.

The animation itself is nothing special -on the level of well made TV special, but the gesture drawings are especially effective.  An illustrator can often do with one drawing what an animator needs dozens to convey.
Posted by roconnor at 6:15 AM