More from the land of Sesame, but this a far off Mexican land. 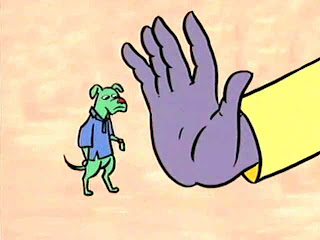 We did three of these "wrap arounds" for CTW (I think they were still Children's Television Workshop at the time) in the course of four days -including the weekend.

In Mexico, where "Sesame Street" is produced as a local versioned "Plaza Sesamo", the program airs on a commercial network. The producers wanted to create little bumpers to run before and after the breaks to remind kids to "STOP LEARNING" and then start again once the adverts finished.

We came up with three variations on the same idea. A cat running, it's stopped by a duck with a whistle. A fish swimming, stopped by a snorkeling penguin.

And this dog and giant hand. Or is it a really tiny dog?

I did the sound effects, including the dog and voices (and the fish -blowing through a straw into milk).

Krystof Giersz -a phenomenal animator, truly one of the best I've worked with dig the animation and Helena Uszac took care the art production on their then brand new Toonz system.

During this production, while I was fretting in their kitchen over getting the job done, Helena said to me: "It's only animation, yes we do it for a living, but it's not life and death. No one ever died over a cartoon -they're just not that important."

That bit of advice was perfect for a young producer -something all film and tv producers should keep in mind.
Posted by roconnor at 6:07 AM