The glue binding is dried and cracked, popping pages from the security of the covers to an out-of-line inch.  The pages are prematurely yellowed.

At the risk of violating the first page's "No portion of this book may be reproduced in any form with the written permission of the individual artist" -I'm going to get all "fair use" on y'all and post a three of my favorites. 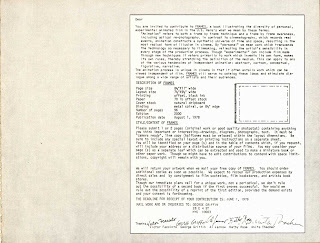 Here's the letter sent to the contributors outlining the plan.  Note: halftones must be veloxed (QuarkXpress doesn't seem so bad now, does it?).

"Animation" refers to both a frame by frame technique and a frame by frame awareness, including optical re-photography.  In contrast to cinematography, which records real events, animation constructs a synthetic universe of time and space, resulting in the most radical form of illusion in cinema.  By "personal" we mean work which transcends the technology so necessary to filmmaking, reflecting the artist's sensibility in every stage of the production process.  Though "experimental" can inclue film made through new techniques it refers primarily to work which invents its own form,  makes its own rules, thereby stretching the definition of the medium.  This can apply to any of the various tendencies of independent animation: abstract, cartoon, conceptual, figurative, narrative.


This drawing by Suzan Pitt my immediate love upon flipping through the book. 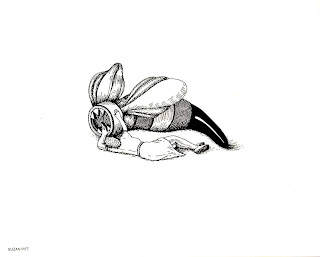 Others, their names have fallen from animation circulation and the simplest investigation makes you ask "why?"  The work created by these artists in the late 1970s eclipses the independent animation produced today -and many are still creating interesting work across media.

Mary Szilagyi is a name I had heard, but knew nothing about.  I knew she worked as an assistant "The Soldier's Tale" (and my memory may be failing, but I think R. O. Blechman told me she worked with Fred Mogubgub to make his segments camera-ready and fit into the rest of the film).

Her piece reminds me of Winsor McCay crossed with Lauren Weinstein. 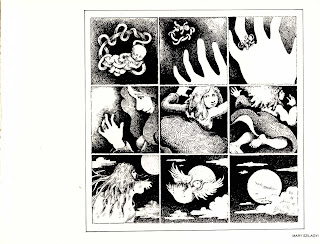 Speaking of McCay, John Canemaker's contribution is a knockout.  What a rare talent, an astute critic, a diligent historian, and a sublimely sensitive artist. 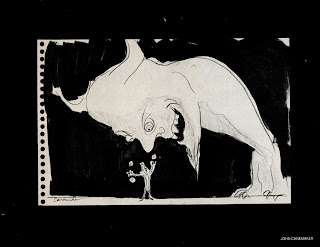 The collection showcases a wide range of artists, all using different techniques with different ends (although the recurrent influence of Steinberg is an obvious flavor for many of the contributors).  Beyond that, the optimism -which springs from an intellectual understanding of what it means to animate - pervading the volume expects animation to a beautiful and profound art.

While at NYU, Mary Szilagyi worked for me as an inbetweener on DR. DeSOTO back in 1983. She left animation to do children's books and continue as a painter.

Mary also worked at Perpetual Motion as an inbetweener on some of the Berenstain Bears specials. She might have started with Al Jarnow doing Sesame Street spots. She had a grat talent for watercolors, and found animation limiting. But a very sweet person and we remained friends until she moved out of the city in the early 80s.

This time in NY is particularly interesting. One regularly hears complaints about the "duldrums", but looking it back it was filled with incredible artists who made their marks in film and many other arts.