There was a special screening at the Landmark Sunshine hosted by Variety and the American Museum of the Moving Image.

As we've written in the several posts on the production, we always felt it was a remarkable script.  The film is interesting, but it would hard to top the excitement of the script.  It's still a special picture. 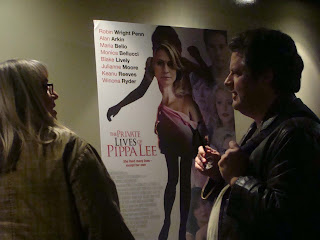 It was disappointing that they cut off the projection before we got to our credits (John Dilworth tells me he saw our credits at an Academy screening).  They're pushed behind all the drivers and assistants and hairdressers assistants.  No belittling their work, or the work of colorists and other technicians -but our contribution was actually filmmaking, albeit brief in screentime.  Animation is treated as an afterthought, even though its the equivalent of handing over 30 seconds of a film to another director to make.

Producer Lemore Syvan was on hand to answer questions.  The host from Variety did an excellent job interviewing her.

Her story is interesting.  She began in journalism.  Said she wanted to work in film.  Was turned for a job, then called back when no one else would do it for the rate.  She was hired as a PA, ended the production as Line Producer.  She admits she didn't know anything about the technical aspect of film.  She learned on the job.  But she's intelligent and clearly had something to offer, because of that she quickly worked her way up the ladder.

The opens in select cities at the end of November.  It's an honest, literate film that is full of terrific and honest dialogue.  And a decent little sequence we did.
Posted by roconnor at 12:13 AM

The film is quite good, probably one of my favorites this year. (It's a fallow year for movies.) The acting was great, particularly Robin Wright, and the script was the best of Rebecca Miller's works. The last 15 mins. didn't quite work satisfactorily for me, but any woman I've met disagrees.

I was a little confused as to why there was only one animated insert. Just as you've adjusted to the animated sequence, it's over, and there are no more - though you've been set up to expect others. It was pleasing to see something that was not the traditional gag-cartoon animation. Nice job.

I also thought your credit was a good one. I'd forgotten to look for it, but couldn't miss it in the credits.

Contractually, we negotiated a full crew and company credit.

Next time, I'll negotiate placement as well. We've done some films where it comes AFTER the music credits, that's just absurd.

The script (which is remarkably beautiful) called for a few more graphic sequences along the lines of the photo still. I suspect they were edit room casualities. In that context there were 4 or 5 of this brief episodes (the lion was another -I had read it more stylized in the script). The drawn animation would be a culmination of these other sequences, a sort of pay off of the set ups.

I think its a beautiful, humane film. Even though I think our piece could've been better, I'm very proud to have contributed.