My Dog Tulip screened in Ottawa.  I was a little disappointed.  This was no Still Life With Animated Dogs or Drawn From Memory -Paul Fierlinger's masterpieces.  Where was the personal revelation?  Where was that halting voice?

It didn't help that a festival setting caters to quick and the flashy, and that I get particularly waterlogged after two or three days of non-stop screenings. 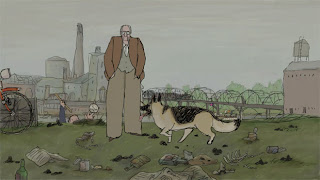 The personal revelation may be dialed back in this film, and the narrator may not speak with Fierlinger's accent and his words may be purple but the voice is clearly his.

The format is in line with many of Fierlinger's films -first person narratives.

Going in, I was expecting this film to be something it wasn't.   On second viewing, it's a beautiful meditation on love and companionship.  I wonder what it will be the third time.
Posted by roconnor at 12:05 AM