Hard to imagine in the satellite age of smart bombs, Burger King commissaries and special operations -when two active theaters of war hardly register in the New York Times' "Week In Review" -that someday a great conflagration could well consume us and our colleagues as it did our forefathers 65 years ago. 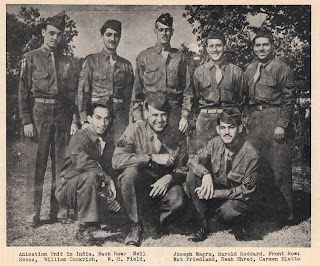 Above: a photo published in November 2, 1945 "Top Cel", the newsletter of the NY Screen Cartoonists Local 1461.  Animators shipped all the way to India.  I wonder what action the Animation Unit got up to on the subcontinent.  Pictured are: Neil Sessa, William Cookrish, W. O. Field, Joseph Magro, Harold Goddard, Nat Friedland, Reah Ehret, Carmen Eletto.

Many animators were drafted into the Signal Corps.  Many more were enlisted into fighting units.

Below is the interior from that newsletter. 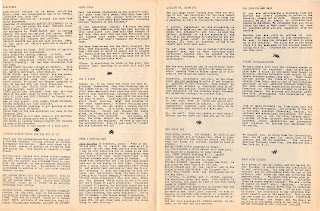 It contains a letter from Jack Baldwin in Gushkara, India (presumably the photographer).  It describes one of their duties to record the news dictated from the Army News Service in Hawaii.

Also in "The Duffy Bag" section:


NICK POPPA GEORGE, TED BERMAN, ED LEVITTE and CARL FALLBERG are civilians now.  Nick is planning to work for Tom Codricks outfit and Fallberg is doing it already.  Berman is back at Disney.

LT. TOM GOODSON a proud father of a baby girl.

LEO ELLIS in a hospital in Long Island.

GEORGE BAKER getting out of the army.

RUSSELL BALDWIN passing through New York.  We are sorry we were unable to see him.

MORRIS GOLLUB out of the service and in New Rochelle with DAN NOONAN.

CAPT. BILL TILTON from the Philippines and in his way home.

A. KEITEL, C. GLENAR and R. STOKES leaving the Anacostia group very soon.  PAUL FENNELL is out already, his place as head of the Unit being taken by JOHNNY BURKS.

CHARLES BYRNE from Anacostia in Screen Gems and HENRY BENDER in charge of personnell.

ZEKE DE GRASSE out of the service and in Hollywood.

The Air Corp assigned LT. GEORGE GIROUX to his home, so he went and got married.


We may not be familiar with most of those names (I only recognize one), but if you were working on the 1942 equivalent of "Blue's Clues" or "L'il Einsteins" one of these men likely would have been in the next cubicle. 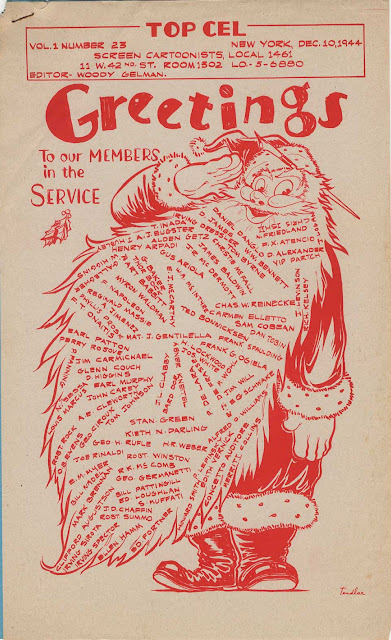 Above, an illustration by Dave Tendler (lettering by Joe Goteri) from the 12/10/44 newsletter containing all the NY Union animators in the service.  Many recognizable names here -some, like Art Babbitt or Myron Waldman, were Signal Corps.  Others, were surely in fighting units.