Weekend in Toronto/Guelph happened to include a 35mm screening of "Fantastic Planet". 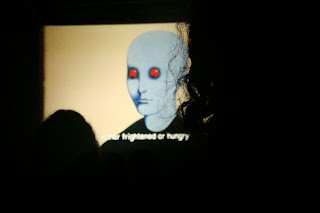 The reels were out of order, a problem you won't find on DVD -but the color and image detail are, uh, fantastic.
I've previously written a little about the film. Storywise, it's similar to sci-fi of its era -Planet of the Apes, Logan's Run, Soylent Green, The Omega Man -containing their intrinsic faults in addition to its own extraordinary merits.
This time, probably because of the projection (Facets, the distributor, had labelled the reels incorrectly) the excellence of the soundtrack was particularly apparent. The sound is strongly influenced by the early 70s electric Jazz. Bitches Brew, Big Fun, Nefertiti, etc.
Turns out the screening was put together by Nick Fox-Gieg. 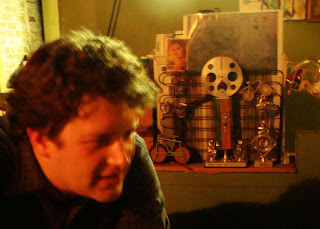 He took us to late night Chinese food afterwards. The theater also had a postcard tacked up from Martha Colburn.
Posted by roconnor at 12:01 PM