I thought this would be a bit of historic ephemera. Hopefully, it will be -but Sarah Palin's holiday weekend resignation has once again placed her, unworthy, in the national spotlight.

In this video from last summer, Steve Brodner wonders about her appeal. We also must wonder about a Republican Party that would embrace someone so clearly out of her depth as a public official. 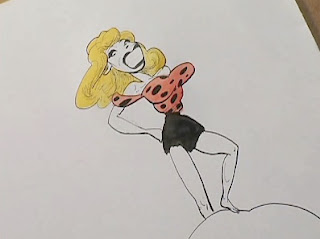 When we originally did this the editors at The New Yorker had issue with the "sexualization" of Palin in Brodner's drawing. Had they not been reading their own magazine? Did they miss the 24/7 coverage of the Governor calling her "hot"? It was one of the many points of her selection to Republican ticket that insulted voters of both parties and played to basest aspects of their own.
Posted by roconnor at 12:45 AM