If I were better at birthdays and anniversaries, I would have noted a few months back- March 9, marked the 2oth anniversary of Fred Mogubgub's passing.

I think I was rehearsing the part of Bud Frump in our high school production of "How To Succeed in Business Without Really Trying" at that time. 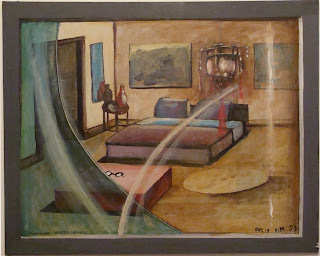 
It's unframed. I just hang the canvas. Although a frame would make it even more interesting.

He's already painted a trompe l'oeil frame. The foreground highlights and the sheen to the left hand side indicate a window and curtain. Already you're looking through two levels. Two levels of peeping into a bedroom. The paintings on the wall are a futhur pleasure- reminiscent of Seurat's painting of the woman in three poses featuring other Seurats in the background.

And, of course, the handcuffs on the table. Goodnight, Harry Houdini.
Posted by roconnor at 12:31 AM