Animators should have trading cards. Like baseball players or Pokey men.
This is a French Canadian card part of the "Cards of Mister Movies (illustrated story of the movie world" series.
John Hubley, rightfully, is represented. 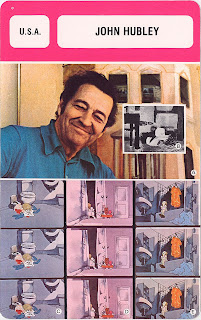 Represented are "Cockaboody" and, inset, "Adventures of an *". 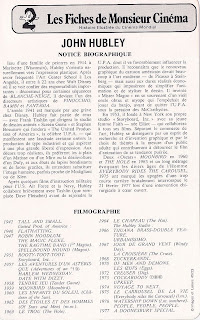 Born in 1914 to a family of painters in Madison, WI, Hubley naturally gravitated to the plastic arts. After attending the Art Center of Los Angeles, at the age 22 he began to work for Walt Disney Studios where he assumed important responsibilities: designer for certain sequences of "Snow White" [I guess that's what "Blanche-Neige" is]. He went on to be an art director on "Pinnochio", "Bambi", and "Fantasia".

The year 1941 marked serious changes at Disney. Hubley was one of a few -along with Frank Tashlin who was a director Screen Gems and Stephen Bosustow -to found "The United Productions of America", the famous UPA -which produced commercial work which ranged for a great freedom of expression. At a time when design was too realistic, they preferred the styles of Mattisse, of Miro, or the ease of Dufy. Instead of bunnies and deer, they preferred human characters -sometimes along the lines of Modigliani or Klee.
After making military instruction films for the US Navy and Air Force, Hubley briefly collaborated with Tashlin (who replaced Dave Fleischer) before creating UPA after the positive experience on the production. He went on to refashion the American cartoon in the modern style -after Picasso and Steinberg -but also due to economic realities which imposed a simpler animation and simpler drawing. He created "Mr. Magoo" in memory of a myopic uncle who played the banjo [I probably got that part wrong. ], before leaving UPA under the pressure of the McCarthyites.
In 1953 he founded his own New York studio, "Storyboard, Inc." with his wife Faith -née Elliot -who collaborated on his films. Separating art and commerce, Hubley is distinct for his spirit of exploration and graphic invention and his choice of themes appealing to an adult audience which contributed to the change from animation for children.
Two "Oscars" for "Moonbird" in 1960 and "The Hole" in 1963 and a long film evoking the many ages of men "Everybody Rides the Carousel" in 1975. His career was brutally interrupted at its height on February 21, 1977 during open heart surgery.

It then lists a filmography -no mention of "Scent of Old Whiff", but something called "Children of the Sun" from 1960 which I'm not familiar with.
Posted by roconnor at 12:08 AM