A few years back I got a call from the British Consulate, they were doing a survey on something or other.

I invited him over and we talked for about twenty minutes. Ever since I've gotten invitations to select events from the Consulate.

Most people, it turns out, immediately hang up when asked to help about such things. The fruit of politeness. 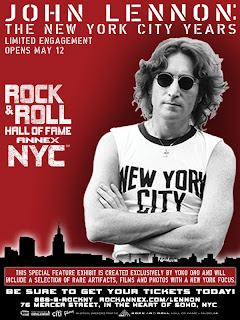 It's interesting that pop flotsam gets not just a Hall of Fame, but a SoHo Annex to boot. The permanent installation at the museum consists of video displays by decades and genres followed by paraphernalia, mostly broken discards from drunken teenyboopers. The kinds of things you'd find on the walls of a really good TGI Fridays.

The Lennon gallery is a large white room. It contains notes and drawings from his time in New York, 45s, articles of clothing, sundry discards from the basement of the Dakota.

Lennon used his celebrity to an end. Although his philosophy was fairly shallow -its strength was its simplicity. His celebrity, gained as a teenaged heartthrob, was parried to something else. Something beyond him. That's interesting. T-Shirts and photographs of T-Shirts only address the cult of celebrity which brought about his assassination.

Mayor John Lindsay's letter fighting for Lennon and Yoko Ono's deportation is the most moving part of the show. It spells out why Lennon was a great representative of New York (and by extension America) and eloquently takes the government to task.

Second in strength is one of Yoko Ono's "Telephone Pieces". A white phone with a sign to answer when it rings. If it did ring, the artist would be on the other end. A clever use of celebrity -without Yoko Ono's fame, the effect is minimal. Just as she and Lennon used their popularity in the late 1960s for fight for their beliefs, she trades on that celebrity today to supply meaning to the work. this is a different "Telephone Piece", but the same idea

The final wall of the exhibit is a sheet of paper that will be "delivered to President Barack Obama" upon the close of the show. The signees want "stricter gun control laws" -there is the problem with T-Shirt politics but what else would you expect from a museum for Top 40 skiffle music.
Posted by roconnor at 12:12 AM