Who amongst us doesn't the lament the slow demise of the postal system?

Casting aside the hourly mail calls of Stoker's "Dracula" which birthed a whole new genre of the undead, taking the GPO's sponsorship of Len Lye out of consideration -the removal of tactile communication from human relationships is great loss.

Yes, LOLcats are nice. "Poking" is a fine form of saying "hello". 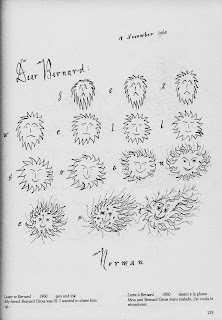 Norman McLaren to a friend

"The Drawings of Norman McLaren" (Tundra Books: Montreal, 1975) publishes several of the filmmaker's letters.
Letters like these open the culture of an artist, the community they are part of and the way they relate to their peers.

I now want to know more about Wija Waworuntu. What did he do at the NFB? Did he keep up with McLaren while pioneering Indonesian tourism? 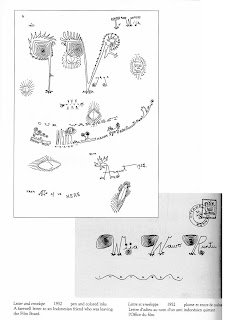 These are reminiscent of Steinberg, for sure. 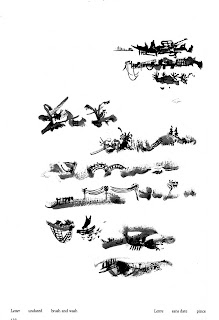 Like Steinberg, only as much as they are part of an era.

These remind me of a story R. O. Blechman told me. In the 1950s he was friendly with Andy Warhol. They were both successful commercial illustrators and had similar circles.

Every couple of weeks Warhol would send out hand painted postcards to his peers. Bob would get one, read the back, and toss it into the trash.

Around the time he told me about this, a friend of his who had kept all the of the postcards (and gave Warhol his first polaroid camera) put his lot up for auction. I don't recall exactly how many zeros were in the sales figure, but it infinitely tops the value of even the most cherished email attachment.

This is all I could find for Warhol postcards:

Warhol post-cards, many post-50s
I look through "Andy Warhol: Drawings 1942-1987" and couldn't find anything that definitely a postcard. I highly recommend this book for students of design and illustration.

Warhol represents many things, his cipher nature becoming the seminal figure of post-modernism, but one thing he clearly was: a clever and sensitive illustrator. 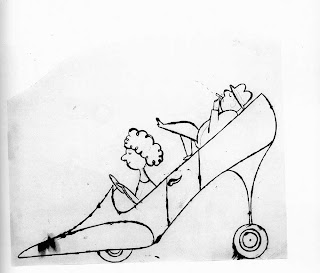 Shoe with wheels, difficulty with the stitched line