Nostalgia, nostalgia -I just had to write about WHT.

For over 20 years I thought it was Womeco, and that it broadcast out of the (apparently non-existent but plausibly named) Womeco, New Jersey.

I imagined a tribe of heroic Indians aiding General Washington in late December 1776 being repaid with a bedroom community named in their honor. But no, it's Wome[i]t[/i]co and has little to do with New Jersey.

WHT was similar to then-fledgling HBO (or our local Philadelphian "Prism"), it was a single channel carrying movies and occasional fights directly into the home. HBO, or Home Box Office as we called it back then, used "cable" technology -like the telephone only carrying pictures. WHT used the traditional broadcast signal, picked up by a special antenna and decoded with a TV top box. 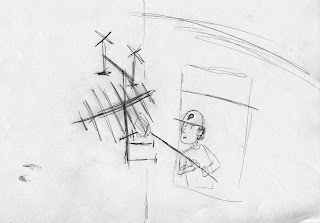 A ten foot antenna affixed to the side of our small military-issue house. And if you wanted to watch the movie that night, you'd first have to lean out the window and knock the antenna around with a broom to get reception -all the time hollering downstairs to verify the operation's success.

This is how I first saw "Alien". My father, at the time much younger than I am now, invited the whole neighborhood (meaning ten to fifteen 10 to 15 year olds). We all crammed into our 8 by 10 living room. I remember covering my eyes in embarrassment as Sigourney Weaver pranced about in her bra.

Near three decades have intervened. My father, no longer with us. Broadcast television, soon to follow. WHT, long passed.

The sensation of a dozen friend lying on the floor screaming at a brand new experience, that can be everlasting.

That's why we're planning a some screenings in a couple weeks at our new space. I'd say we're open for suggestions, but we're not. I'd say we're kicking it off with "Alien", but nostalgia is only useful if it brings you to a new place.
Posted by roconnor at 1:39 AM

Shall I start pricing some projectors or did you manage to get your hands on one to go with the 'projector' I donated?