In case you've been missing it -like me. Because you've been working to "make ends meet"-like me. New York City has been hosting The World Science Festival 2009.

Last night I got to one event, Nothing: The Subtle Science of Emptiness. The festival also plays to the cheap seats with "Wall-E's World: Design for an Invisible Footprint" which mixes the pop science of carbon emission control with the feel-good theatrics of the Pixar film. Although no one involved with the film was scheduled to be at the forum.

Nothing. At the Tishman Auditorium. John Hockenberry did a great job moderating. 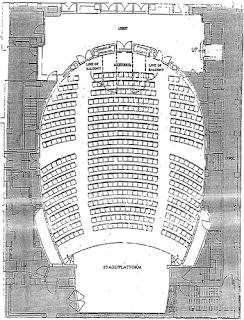 Tishman Auditorium at The New School, not pictured: whisper chambers
Most panels are poorly run, ones in the animation industry are no exception. Often it's one guy pontificating on his own work while the other panels look at their shoes, often it's silences and awkward pauses. Sometimes the moderator is over his head, sometimes he overpowers the guests.

Mr. Hockenberry showed a fluency with the difficult ideas with belittling them. He asked clear, provocative questions and kept all four scientists involved. He also did one thing that's rarely done (to my eternal frustation) he repeated audience members' questions, distilling their essence so everyone understood them. 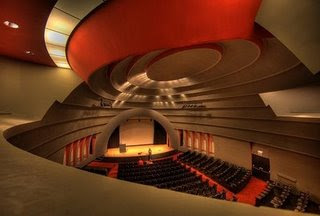 The photographer is communicating with the person on stage, IN WHISPERS

So much for the wrapping. The content, the content was -nothing. A Nobel Laureate and three other really smart guys trying to pinpoint the content of nothing.

Even in a vaccuum there are pairs of particles and particles within particles.

I'm not much of an artist, so animation doesn't come easy to me. But I like to think about it. And animation is scientific. Things move in waves, everything moves in waves. And the most powerfully charged spaces, as in nature, are "empty".
Posted by roconnor at 1:33 AM

I got to go to a few of the events last year which is good since this year "working to make ends meet" has destroyed any chance of me traveling outside of Brooklyn during the week.

The list of forthcoming UPA animated features comes from this NYTimes article.

Antheil's opera "Volpone" is even more interesting than the Ben Jonson.

Hubley's departure left a big creative void at UPA. I wonder what he would have come up with had he the resources of a larger studio at his disposal in the '60s and '70s.