We were up at Sesame Workshop yesterday. We stopped by to see Matt Stoddart and I realized we never posted the final "Origami" we did together for Nickelodeon.

While in his office Matt gave us an Abelardo doll. 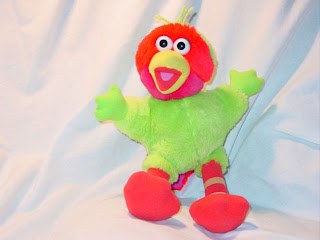 Abelardo is the Big Bird of Plaza Sesamo

Ed Smith did the animation of the boy. Winnie Tom did the CG animation and most of the compositing.

The music is performed by Yomo Toro on the cuatro which is a ten string guitar associated with Puerto Rico. This is what makes the piece, in my opinion. It's a melancholy sound that provides an emotion weight for the picture.

We went to a basement studio in Jersey City where Yomo likes to record and they laid down the recording in multiple takes on a quarter inch, eight track tape. JZ Barrell was responsible for synchronizing the speeds (long story there) and cutting the track down from roughly five minutes to song you hear in the final.

I love the music from Origami. Is it available for purchase from somewhere? I've never heard of Yomo Toro before but am definitely checking out some of his work now.

The track was recorded specially for this project.

Drop us an email and I'll send you an mp3.

By any chance, could I get that Yomo Toro's mp3 as well?

Sure, send an email to our "contact" and we'll get you one in the next couple of days.

My 2 year old daughter and I absolutely love the music to this video! Is it possible to get a copy of the music as well?

Yes i definitely agree with the others. Its a lovely instrumental song. When i first heard it i fell in love with it. If possible i would love to have a copy of the mp3. If theres a way to purchase it, that would be fine too. Does the song have a name?