I'll be at the new Yankee Stadium this afternoon, hopefully watching the Phillies drub CC Sabathia as Cole Hamels puts up zeros on the scoreboard. Even if that's not how it turns out, I'll have the rare comfort of knowing that, for now at least, "my" team is the reigning world champion.

And, once again, as tough as it has been to be a Phillies fan -its worse cheering for the Cubs.

As this terrific illustration by Dan Zettwoch demonstrates. 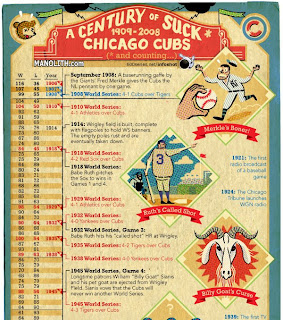 Click HERE to see the rest.
Posted by roconnor at 5:04 AM