I've been thinking about writing a bit on our process for a short film we made for Nickelodeon a couple years back but it's taking a while to assemble the goods.

We'll start with the concept models.

The piece was called "Origami". And it was about a boy who escapes to an origami world.

Matt Stoddart wrote the scenario and did the character designs. He also made these to model after: 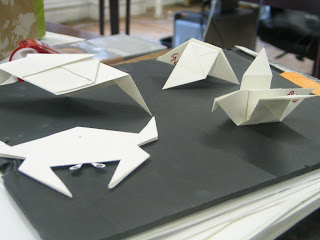 Eventually we would create our own patterns. Origami paper is copyrighted and we respect artists' rights. 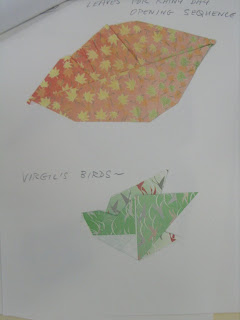 These would interact with a drawn character. 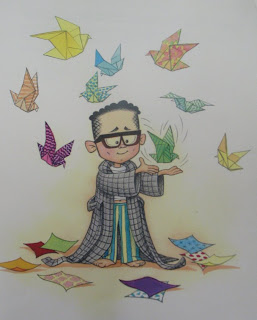 He's worked as a puppet designer for many years, so he has an innate feel for construction and dimensionality.

This is how he began to breakdown the character: 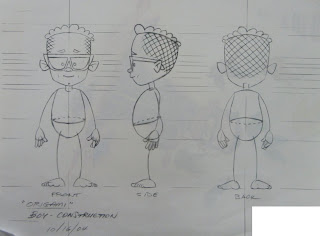 Hi Richard, purely coincidentally I wrote about "Origami" on my blog today, as well as casting a necessarily fleeting eye over your studio's very varied output. I ventured the opinion that animators enjoy working for children. It brings out the child in all of us. "Origami" ticked all the right boxes: fantasy, delightful music and designs, even a treasure island. A lovely short.

You mean, the paper that was used for your oragami sculptures is copyrighted, because of the design in the corner? Or oragami as a concept?

Origami patterns are created by artists who hold the copyrights on their work.

It's the patterns, not the folds or the concepts.

Obviously, we live in a world where people think they can appropriate the labor of others without due consideration -and in this case "nobody would know". But given the option of creating something new, and greedy grabbing the work of others we chose the former.