Ray Romano? Tom Hanks? Neil Diamond? No, no and no! 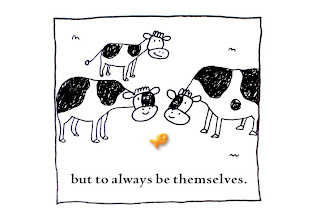 escaped cows
We did this little film through Young & Rubicam. Click here to play.

It's based on a little booklet. Originally the book was intended as a magazine insert -glued onto an ad. Turned out the media buy was too steep (there's a Depression on, you know).

The agency was taken with the idea and wanted to put it to use. TV would also be a little pricey -so they turned to the web for distribution.

Each drawing was traced back in the first version (at agency request). A traceback is when the animator (usually the clean up artist or inker) loosely traces over a drawing. This gives the line a little life -sometimes referred to as a "boil".

As a rule, we don't like the device. In this case, the agency agreed and it was eliminated.

The drawings for this piece were all done at a small scale. Just under a 5 field which is just under 5 inches across. We wanted to keep a simple, näive look to line and animation. By working small this would come naturally.
Posted by roconnor at 3:48 AM

Charming, but your linky link is all screwed up.

That is pretty damn charming. But is Ray Romano really a "cracker"? Perhaps I need to brush up on my ethnic slurs.