You Can't Spell "Development" Without 4/5ths of the Devil

A little while ago we got a call from one our favorite "kids" t.v. producers.  We'd worked with him and his writing partner a few times and have always gotten along well.

They had a pitch meeting with a very big entertainment conglomerate which went something like this:

Creator:  We have this great idea.  It's a show with funny animals.

Conglomerate: Uh.  We don't do that.  What else have you got.

Creator: Uhh.  [pulling something out of his hat] We've got this show about a shy teenaged girl whose PDA makes a cool outgoing version of her.

Conglomerate:  Interesting.  Get us a script and designs.

It was a "tween" idea, we trusted the writers and they trusted us to come up with the right design.

As I've mentioned before, we've always wanted to work with Maurice Vellekoop, he's like a sexier, gayer, less Scientologist Beck so this teen girl project was truly a perfect fit. 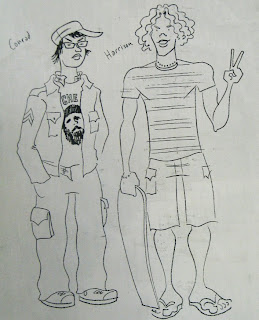 We set to work on the design.  And really, I don't mean to brag, but it was perfect.  Everything about it was 100% right.

Enter "The Legal Department".  They wanted to pay us less than CTW would have paid in 1995 for significantly less work and "own" the resulting work.   I pointed out that their rate was far below market value, but we'd accept it as long as we could negotiate other terms  (right of refusal on production, ownership of original art, etc.).

Their response: "We don't negotiate."

Flabbergasted, I said, "You're a contract attorney -your job description begins with the word 'negotiate' followed by 'contracts'". 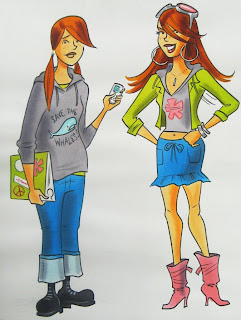 before and after
So eventually I said, "Well, send us the deal -we'll take a look at it and get back to."
Pissant paralegal pulling down $250k a year in LA says, "We can't send you the contract until you agree to the terms."
At this point, all of my politeness was worn down.  "Are you running some sort of telemarketing scam?  This is absurd... I've never... blah, blah, blah." in addition to characters we did several scenic illustrations
After that I wasn't allowed to talk to the lawyer.  Who I don't even think was really a lawyer.  If she was, she should be disbarred.  Rude stupidity may not be a crime, but it has no place in our legal system.
At this point I was will to drop the whole thing.  Despite our affection for the creators, without any promise of production or stake in the character the pittance we would get paid was not worth the time it took to receive the insult.
But we put it to a vote within the studio, and it was decided we take our chances. 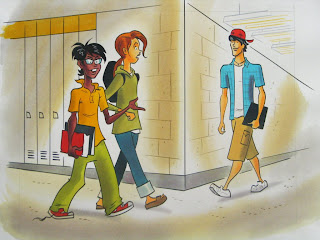 did I mention how perfect I think the art is?
Of course, they gave us a needlessly hard time about the design.  Not the art direction, they signed off on the approach first thing.  But every step of the way they stupidly micro-managed.
An aside:  I accept that clients will sometimes tell me how to make films,  that the advertising account executive gets input and the babysitter of the network executive will have a say.  Grin and bear it.  But telling Maurice Vellekoop how to paint?  How to draw cool teenagers?  That kind of thing drives me nuts.  As a producer, I feel as though it's my job to protect artists from this sort of vain idiocy.
In any event, the big decision day comes up.  The creators give us a call: "They're going to pass.  They told us they're only picking up shows that feature animal characters."
Posted by roconnor at 4:57 AM

The old axiom applies: The clients with the lowest budgets are always the most difficult to work with. Life is too short.

I've said it before and I'll say it again, "pitching a show is no way to make a living."

It's something that only makes sense when you're not depending upon it. It's a lark.

I worked on a Nick pilot where the creators all had to get part time jobs just to survive the duration of their own pilot!

Even worse, Michael, are those times when low budget clients are great to collaborate with -they trick you into thinking it's always going to be like that. Until the next one comes along...

Absolutely, DBL, getting underpaid and getting treated like a disease are different things. We've all done work for little to nothing, especially on pilots and pitches -that's when "producers" and "legal" should treat you best. If your work pays off, it's giving them a job for another 5 years.

I always think it's funny that it's called a "pitch".
Like throwing something away, or having a tantrum.