God Save The Queen

The early 1980s look like a tough time to have been British.

Punk burnt itself into New Wave, everybody loved Maggie and the animation -it looks like the Battle of London hitched up with Mutual Assured Destruction to produce two films which vie for "most depressing animated film ever".


Doing our bookkeeping this weekend, to get in the mood I finally watch the copy of The Plague Dogs which Christina lent me over a year ago. 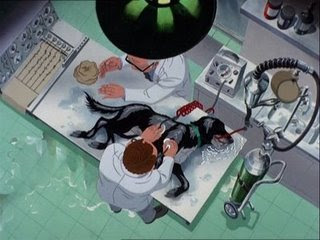 She also lent When The Wind Blows at the same time. I watched that first. It's taken several months to recover from the morbid feeling.

When The Wind Blows was released in 1986, a feature length follow up to Raymond Briggs' widely acclaimed The Snowman. That film aimed to outdo the hopelessness of The Plague Dogs (released four years earlier) by showing two doddering codgers slide into a grueling death over an hour and fifteen minutes. 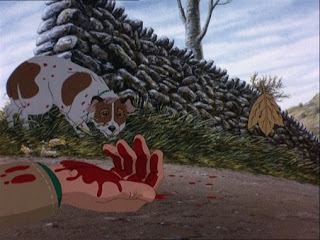 This is one of the happier scenes in Plague Dogs.  Dog accidentally shoots man. Feels remorse.
The Plague Dogs follows up Watership Down -the same creative and production team, this time with not a frame of input from John Hubley.

Two dogs wandering the countryside and slowly dying vs. two old people in their home slowly dying. It's hard to choose which is more inspiring.
The dogs are animated in a realistic fashion. That's probably the right choice, given the nature of the film -but that choice shackled the animation. We never connect with them, in part, because the animation is stiff and formal.


As I've written before, I'm a great admirer of how Ed Smith animates dogs. He has that rare ability to be anatomically precise, but still give life and character.

I wonder if better acting from the dogs would've made the film more enjoyable. If it would make for a stronger piece. I think so, now you cringe and look away that the painful scenes (most of the film), with sensitive animation we'd be drawn in -unable to look away.

We talk about what animation can be -"documentary", adult, personal. How films that use animation techniques can express the same depths as live action. These British films are strong plays at mature storytelling. Ultimately, they reveal more about their own culture and times than any great universal truth. That, in itself, is noteworthy.

Will today's spate of "mature" features -Persepolis, Waltz With Bashir, Mary and Max and on and on -represent a new age of intelligent storytelling using single frame technique or will they come to be seen as a byproduct of an era which prized novelty at a time when economics made animation a viable gimmick?
Posted by roconnor at 4:42 AM

"When the Wind Blows" is almost too sad to view. The final frames choked me up.

translated in English by Google