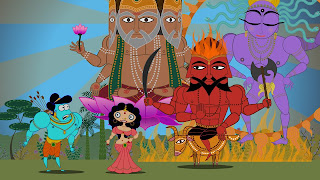 At the Ottawa Festival last year, I mentally prepared myself to accept an award on behalf of Nina Paley much as I had been asked to represent PES on the podium previously.

Turned out a spell of anxiety and a football game coincided with the award ceremony keeping me in the hotel, and another picture won anyway.

What could I have said?  Sita Sings The Blues speaks for itself.  It is one the most remarkable pieces of work in this young century.

Channel 13/WNET will be broadcasting the film tomorrow night at 9 PM (although it'll probably be later -"Reel 13" starts with a "classic" before the "indie").

Much of chatter around the film has centered on the music rights issue.  The underlying point of the arguement is legitimate -that copyrights extending 75 years from the death of the creator go on far too long, effectively eliminating public domain. 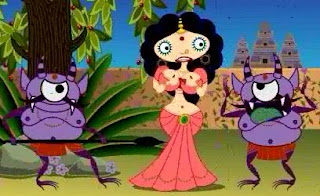 When she discusses this issue, Nina takes it too an extreme.  She conflates her crusade against copyrights with her stoic worldview -a singular perspective that disdains reproduction, Christmas, and any number of other middle class staples.  When she talks about copyright, I can't help but think she's taking shots at "breeders".

That tenacity can backfire, as it does in her film The Stork.

It's a remarkable piece of work.  Everyone in New York should be watching tomorrow.