The weekend started with Knowing and ended with $9.99.  Rock and Rule was sandwiched in between, but I don't have a clever way to include that. 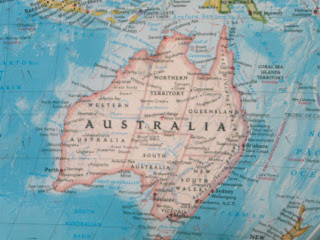 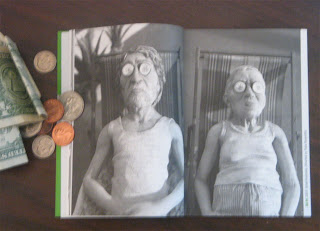 It's a story about humans.  A story about humans, yet the production techinique is de-humanizing and alienating.  The fact that we're looking at puppets, fingerprinty foam latex puppets is foremost in every frame.  The story demands emotional performance, sympathy which the technique simply cannot provide. 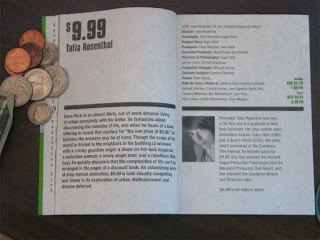 There's one emotional connection, it occurs with the inanimate piggy bank.  Significant, I believe, of the strength of the writing and the failure of the technique.

In Knowing, a cypher predicts the future.  We 'know' what's going to happen, it's carried out, and yet it's still surprising.  In fact, the execution of the prophecies is more surprising to a contemporary film audience that their aversion.  More than surprising, the special effects wizardry of the climax is downright fulfilling.

From the onset of the parallel narratives, there is an even greater feeling of inevitablity in $9.99. We 'know' all of these people will have instances of intersection which lead to a moment of grand redemption. The film sets this up 75 minutes but the grand moment -despite mighty straining from the soundtrack -doesn't payoff the long build.

The director, Tatia Rosenthal, said she worked with this technique because it was what she knew best and what was comfortable.  That may have made it easier for her over the two years of production, but it was a disservice to the film.  $9.99 is 'good' for animation, and those of us who feel the techniques of animation go beyond Broadway musicals for children -just as Waltz with Bashir created a stir.  It is also a good signpost of what the technique's strong points are, and what happens when you remove the human connection from a human story.

An animated character that fails to connect on a personal level is usually 1) badly animated and 2) badly designed. Why doesn't "Waltz with Bashir" ultimately work? Why were the animated segments of "Chicago 10" not engaging?

And the people who made them are at fault, not the technique. If animation comes across as less than totally convincing, that's due to a weakness in it's creator, not in the bits of clay, particles of sand or pencil markings of which it is physically composed. It would only be so convenient if we could blame our pencils, our puppets or our budgets, for that matter, as some are wont to do, but in the end, if you're animation doesn't connect on an emotional level, you're the one to blame.

Let me add the following link:

This is the first film that really turned me onto the extraordinary potential for acting in animation. It was done with clay, same as $9.99, and uses mostly dialogue and simple cinematic techniques to tell a very emotionally involving story, same as $9.99.

This film was a success because someone actually buckled down and made a good film instead of being too busy blaming networks or budgets or their own mediocrity.

I was being polite, in part.

When I was in college I studied theater. In one class, we were charged to breakdown a play and prepare it for production.

The teacher presented a few obstacles and several student replied that they would overcome it by "getting a good actor".

Ever since, the "good actor" solution has been a red flag.

You shouldn't need great animation for an animated film to work -that's relying on extraordinary ability.

All media of a film should play to the purpose of the story. If a technique's inherent shortcomings undercut that purpose (like motion capture in a political drama, or foam latex puppets in a chamber ensemble) then you've chosen the wrong tools.

Of course, its ultimately the fault of the filmmakers for making the wrong choice. But it is the shortcomings of the technique that made it so.

Just as choosing a pencil to animate photoreal shapeships would be a wrong choice, politeness allows for metonomy to blame the 2B.

In Chicago 10, the biggest problem was actually in the hand drawn sequences, though, yes, the rotoscope was rotten, too.

I'm surprised to hear anyone had issues with the limited drawn work in Chicago 10, besides us -of course -whose dealings on the project were nightmares made real.

Aw, I was hoping to hear a bit about "Rock and Rule"! I saw that film many years ago and still remember Lou Reed's anemic but catchy song "My name is Mok, thanks a lot. Sometimes I'm cold but I'm really hot..."

Don't worry, John, I've been thinking a lot about Rock-n-Rule and the competition between Lou Reed and Debbie Harry to over who could sing with the least enthusiasm.

They thought rock and roll saved the world, but actually it was saved by ironic, bored detachment... who knew?

I'm glad to hear other people have seen this film and are debating it. When I saw it in March I thought it was a fascinating attempt to bring a certain kind of graphic novel to the screen and the stop-motion made it seem more real to me.

I just posted a short review at http://ourspacemovieblog.blogspot.com.
I would welcome your comments and reviews there. Thanks, Mike F.