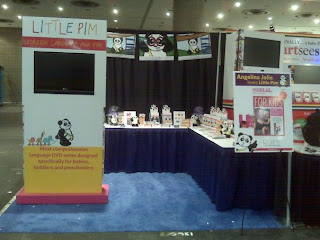 Toy fair was a couple weeks back.  Here's a booth hawking some merch for a nice project we worked on.

Little Pim is a series of language DVD for toddlers.  It's created by Julia Pimsleur Levine after the Pimsleur language immersion method developed by her parents.  WNYC listeners are familiar with the name, Simon and Schuster sponsers the radio station under the auspices of the Pimsleur Technique.

There are current 3 DVDs in 6 languages (plus English).  The live action and editorial were done by Big Mouth Films (except the pilot which was cut at Asterisk by Mitch Friedman).  We did probably around 40 short little bits starring the panda.

We worked in Flash.  Not my favorite tool, but given the circumstances allowed us to get the job done.  Chris McMurray, Abbey Luck and Christina Riley were responsible for the lion's share of panda.  Jonny A did some too, I think.