I don't really like "rooftop" films. This probably puts in a minority, most people seem to love it.

A film is a particular experience, its an immersion. I don't find bad sound "charming", and poor projection isn't "fun". 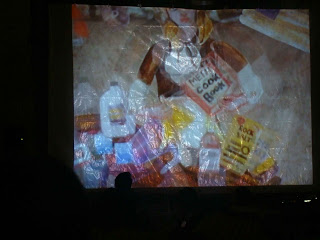 They should give up the pretense of caring about film art, if they're going to present it on the equivalent of a 10 foot Hefty bag. The disrespect would be shocking, if it wasn't already evident that the New York City curator only cares about spending the weekend in the Hamptons -art, that's just a means to an end.

Anyhow, on to the show.

The films from the 20th Century are special. I wrote a piece for Chris Robinson's "ASIFA International" a few years back, I don't have a copy and I'm not even sure he published it. In it, I discussed how these films (like "Evil of Dracula" below) are explosive meditations on a single idea. They're like unspeakable thoughts -the kind you fully understand but words can not describe.

That's what those films are like. Three minute words expressing an idea the only way possible. 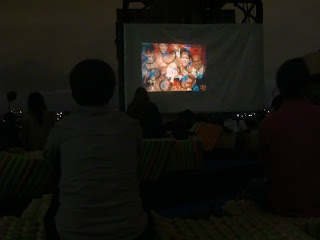 Her newer work is wholly different. There's just no comparison.

They're longer. The soundtracks are indirect. They ramble.

One day I hope to come to some manner of approaching them. I'll probably have to watch a compilation tape continuously for days on end. It wasn't until a few dozen screenings of a VHS that Shawn Atkins lent me around 1999 that I started to get a glimpse of what was happening in those earlier films.

Its intriguing that an artist's work can continue to be regarded by the world as "the same" over the course of a dozen years, when the essence is completely different. 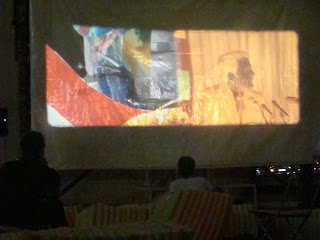 The evening finished with a "work in progress". Using two projects Martha weaved images together (she earlier played with a live dancer and manipulated projector to create often stiring visuals).

One projection was nearly all "talking head" footage projected from the negative. It will be interesting to see where this goes.
Posted by roconnor at 1:31 AM