I picked up this 1971 issue of Life Magazine for Christina, she's loves Disney World so much that upon finding out she couldn't marry it decided to get married there instead. 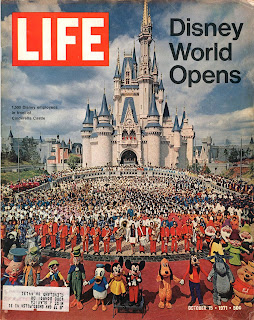 Before posting the images from the photo essay for all you coaster enthusiasts in "toon" land, there was another little article that caught my eye. 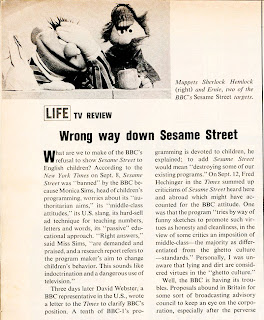 click to enlarge
The BBC passed on airing "Sesame Street" amid claims that the program promoted "authoritarianism."
Having worked for Sesame Workshop (nee The Children's Television Workshop), they really could use a benevolent dictator to get their trains running on time.
Comedy aside, the politics are interesting. The claims were being leveled by the British Left. As we've seen in our own country attacks from opponents of the Obama administration as well as his predecessor can quickly devolve into hyperbolic name calling.
The "Sesame Street" story in Life suggests that the underlying cause of the complaint is sour grapes. British educators were simply upset that they hadn't come up with the idea first. This is a phenomenon which regularly plays out in public debate.
Think back to the American reaction to "Teletubbies", accusations were leveled from all quarters -including the charge that one of the characters was homosexual. In the United States being totalitarian is one thing, but kissing people of the same gender -unacceptable! 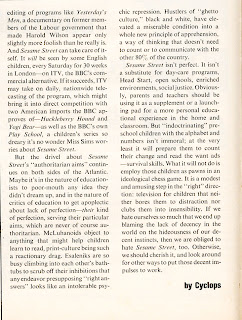 part two
One accusation from the British Left was that the program promoted "middle class" values like "reading" and this somehow was negative.

No wonder the bane of Thatcherism loomed a decade away in the British Isles.

**************
I also had to share this advertisement for Binaca. Unsigned, its clearly the work of the very great Arnold Roth.

making bad breath look good
Posted by roconnor at 12:32 AM