A few weeks back I went to KRAZY! at the Japan Society. That exhibit claims to be the first large scale show of anime and manga in the United States. Something like that is important for the press release, and while I don't know of any specific predecessors off hand -the shows that pop up within and alongside the dozens of anime conventions every year might take exception.

The show itself is off, unfulfilling. There's terrific work, but it doesn't hang together. The pieces don't illuminate one another and the galleries are completely unrelated. 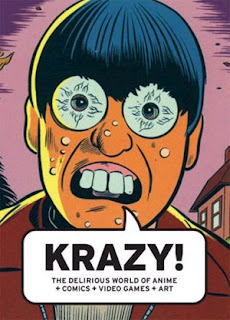 In conjunction with the show KRAZY! the book has similar problems. More properly "KRAZY! The Delirious World of Anime + Comics + Video Games + Art".

Going by the book, the show in New York appears to be a fraction of the original presentation in Vancouver. The sections on "Comics", "Graphic Novels", "Animated Cartoons" and "Visual Art" didn't make the trip.

Still going by the book, their inclusion would have served to make the exhibit even more shattershot and less fulfilling.

The premise of the book/exhibit is that these fields (Anime, Animation, Manga, Comics, Video Games, Art) are closely linked and share similar narratives and formal characteristics. That their culture impact is significant and pervasive.

That's what they say, anyhow. There's no proof offered, argument presented or glancing connection made. These may be interrelated fields -as comics and video games are the children of the motion picture (Cain and Abel perhaps) -they likely are very closely connected. Some discussion of this could be fruitful. 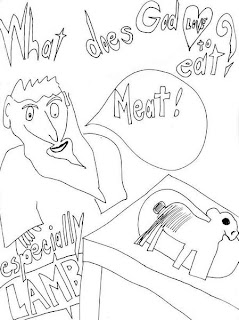 Instead the book offers seven distinct sections comprised of brief profile of individual artists. Casting aside the merits of discussing manga and to a lesser extent anime as the work of auteurs, these profiles are shabby.

Shabby except for the Comics and Graphic Novel introductions by Seth and Art Spiegelman.

Seth, a guy who knows about old comics
To understate the obvious, both Seth and Spiegelman are accomplished in comics. Beyond that, they bring a personal devotion to its history. When they speak of George Herriman ("It's an artform that can't exist anywhere else, that can't be applied, understood or responded to in any other context than that of a daily comic strip.") not only are they heroically undermining the raison d'etre of the collection the vivacity of their language makes you want to drop everything and pick up "Krazy Kat".

The other contributors don't provide the same impact. Possibly Seth and Spiegelman combine the rare traits of writer, historian, fan and practicitioner. Possibly the field of comics has already crossed the critical barrier into high art/literature and it can be discussed on that level. How long until animation and video games make that leap?
Posted by roconnor at 12:58 AM