As The PowerPoint Turns

Sometime in the mid-90s I saw Ben Katchor give a talk which culminated in his narration of a slide show of his comics.

It's an indelible memory.  A great theatrical experiance. 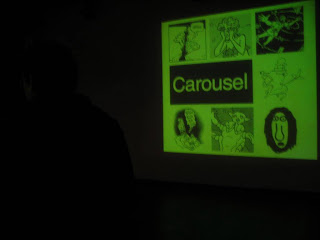 A few months later I went to my first "Carousel" performance.

R. Sikoryak has been putting these shows together since the age of slide projectors.  Last night's show at Dixon Place (in a fancy new space with uncomfortable seats) was characteristic of the series.

Longtime presenters Brian Dewan and Jim Torok joined Sikoryak, Tim Kreider, Josh Neufield and first-timers Dean Haspiel and Kriota Wilberg.  Some are straightforward readings (like a poetry mixed with a slide show), others are like intimate monologues by the artists.  Tim Kreider, for example, shared a series a comics he drew several years after a bad breakup, he created a new structure to frame them and extemporanously explored their history.

Email ThisBlogThis!Share to TwitterShare to FacebookShare to Pinterest
Labels: comics