And In This Corner...

Saturday evening I saw "Tyson". The duration of film is a virtual monologue by the boxer. Born in New York, brought himself to the height of his profession giving credit to his mentor, traveled the world.

We all know about the tragedies of Iron Mike through the tabloids and talk shows. The film does little to temper the impression that he's a maniac, but it's not unsympathetic -ultimately painting a subtle portrait of man who may just be a scowling cartoon. 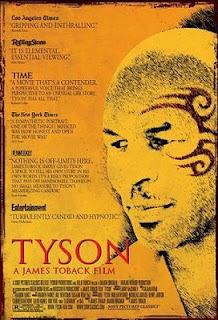 "Tyson" was followed up this week by "Milton Glaser: To Inform and Delight". This documentary is also a virtual monologue, this one presented in multiple locations with occasional guests in contrast to the starkness of the boxer bio. 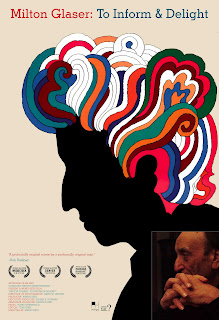 Milton Glaser -also born in New York, also the height of his professional who praises his teachers, also a world traveler -smiles through the entire documentary.

And why not? The film about him may not be as polished or moving or (ironically) even as well constructed as "Tyson" but it shows nothing but happiness in his life.

The documentary presupposes that you already know a good deal of graphic design history. Not only the hegemony of "Swiss style" design of the middle 20th Century which Glaser was instrumental in breaking, but importance of Folon, the family tree of Pushpin, and the impact of New York Magazine on the entire publishing industry.

*****
One of the first commercials I "produced" (in more quotes than usual) was designed by Milton Glaser.

It was the second and third in what would ultimately be four spots for an investment firm.

This was probably 1997, at The Ink Tank. Brian was bidding the job with an ad agency we had a good relationship with. The agency producer (no longer at that company) still calls us for projects a decade later.

We were pitching the design and contracted Richard McGuire and someone who I've forgotten to create models. Everything was going along fine when Brian detected the job, as we say, was going South. He asked the agency what the deal was. The producer told us they were triple bidding (as always) and the competition was presenting Seymour Chwast. The bigwigs at the client were wowed by that.

Not to be outgunned with 1960's design firepower, R. O. Blechman (our "boss") said "Well, if he's pitching with Seymour, we'll get Milton Glaser."

The first spot was done on film. A year later, I was working primarily on "Troubles the Cat" when the second contract came in. The commercial producer was on vacation and I was eager and foolish enough to plant myself in the middle of production.

This was being painted digitally at Tape House Digital Ink and Paint (before they re-christened themselves the abhorrent "Tape House Toons", ugh "toons"). They insisted that every color be delivered on a separate cel level. This was a spot that featured no fewer than 13 characters wearing all sorts of patterns frequently on screen at the same time. And color blending? Fuggeddaboutit.

In the long run Brian and production co-ordinator Laura Kraning managed to shoe horn some sensibility into the process. I just observed slack jawed.

One spot was animated by Tissa David, the other Ed Smith. I only had glancing contact with Glaser and he was professional and courteous. It felt like he was doing the project, not so much for the money -which was good, especially the amount of work he had to do -but out of respect for his longtime colleague, R. O. Blechman. An lesson in human dynamics.

*****
Years later I had a throw down arguement with another very well known designer/illustrator over Milton's 2001 re-vistation of I (heart) NY. I (heart) NY MORE THAN EVER, with a little singed heart.

Less than a month after the World Trade Center was destroyed, I felt the slogan was trite and dishonest. You really love NY more than ever? Because of this? On top of that, the elegance of the original turned leaden, heavy-handed. No, I (heart) NY -the original- said it all. I (heart) NY 2001 was so many George Bush's throwing first pitches at Yankee Stadium. Maybe you'd feel good about it in the moment, but where did this bitterness in the pit of your stomach come from?

Blechman's illustration -dashed off right after the second tower fell -I argued was far more poignant. And far better design. It's shorthand conjured Glaser's logo, the towers themselves, and summarized our basic emotions of the event. Illustration cognosci could even recall Blechman's own "New Yorker" cover of the 70s with the World Trade Center converted to energy-saving windmills.

Moments after I poked my head into the airbrush room to update him on events,
Bob emerged with this. He then fiddled with it for hours.

"To Inform And Delight" makes one profound point: we all know Milton Glaser. We may not all have these second-hand brushes with him, and this film certainly reveals his gift as a lecturer more than a character. We know him intimately through his work which flows all through the city: Grand Union, Brooklyn Lager, I (heart) NY, even The Rubin Museum.
Posted by roconnor at 12:17 AM

I had a great relationship with Blechman, I know some people might find this odd but he was a good collaborator and, more so, a kind of mentor to me.

There were many projects in which his involvement was either peripheral or symbolic. Just as you'd expect from an artist torn between running a business, a creative studio and an illustration career.

So the "boss", I guess, implies that I always felt I could make independent decisions even though I was an employee.

It was a good environment for me. Not that the relationship was complex, it wasn't, there just isn't a good word to sum it up.