The first book I remember is "Cloudy With A Chance Of Meatballs".  That was my first favorite book.

It was supplanted at a young age by Martin Gardner's "Aha! Gotcha: Paradoxes to Puzzle and Delight." 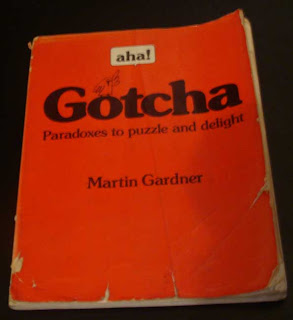 The New York Times posted Mr. Gardner's obituary yesterday, he lived a full life -to an animator's age of 95.

This title combined simple logic problems -many I still drag out 30 years later like The Barber Paradox (credited to Bertrand Russell) -with simple illustrations. 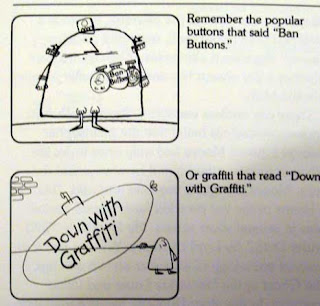 I was a little disappointed to learn that Mr. Gardner didn't draw them himself.  A small credit on the title page goes to Ray Salmon for the artwork.

Years later I sought out his work, subscribing the Skeptical Inquirer after seeing his byline in the high school library, picking up dusty titles at the used bookstore on 5th and South Streets.  His writing on the paranormal was an antidote to the steady diet of ghost stories and space alien books every healthy American teen devours.

Decades later I've shared great moments reading through these goofy paradoxes.  Moments, like the passed heroes, that continue to live in memory. 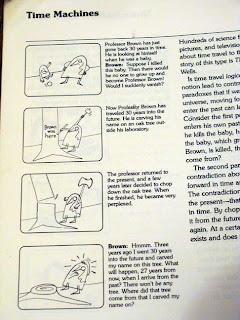 The Times obituary echoes what how I described to friends: a 19th Century style thinker -like Samuel F. B. Morse or Thomas Edison.  His work -combining humor with science, simplicity with complex ideas, and let's not forget funny drawings -sets a template for the kind of work we most enjoy.
Posted by roconnor at 1:36 AM

Email ThisBlogThis!Share to TwitterShare to FacebookShare to Pinterest
Labels: miscellany