The New York Times, Jeff Scher and an Old Article

Jeff Scher posted a new film on his New York Times "blog" the other day.

He's been doing these films for a while, over two years probably. The series is a great example of what news commentary and journalism (emphasis on "journal") can be in the digital age. A mix of video, art, opinion, experience and interactivity.

I'd like to use this opportunity to share a write up I did about Jeff for the Ottawa International Animation Festival reader in 2006. 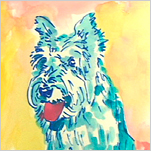 The table was elegantly set, the meal from butcher's finest cuts, the guests all light-hearted and charming as if transported from an 1880s London drawing room to a 21st Century New York City dinner party. The host, however, was becoming visibly unnerved. Wit every moment he grew tenser, with each word he flinched. After a seeming eternity of Jeffrey Scher rhapsodizing on the brilliant simplicity of a local television commercial -how it might look upon first glance to e one of hundreds of cheaply produced ads for late night TV that, in fact, this one was special, after all this and before Mr. Scher could say more the host erupted: "All right, who told you!?!?" Unwittingly, Mr. Scher had found himself in the presence of the auteur.

Bonnie Siegler, the designer whose company, Number 17, regularly finds it's work featured in $30 design magazines and who finds herself as Jeff's steady date, leapt to his defense, "He's not kidding. He's obsessed with that commercial. He flips through the channels late at night hoping that it'll come on."

Once the guests were sworn to secrecy, our host revealed the circumstances of the commission. It was essentially a good deed done for a neighbor. The artist decided to place an array of restrictions on himself as a sort of creative obstacle course to keep himself interested. He disregarded "fluidity" of motion in favor of implementing a number of short cuts. These short cuts became the graphic shorthand that had Jeff mesmerized.

Animators make a fetish of motion. Many go as far to scoff at certain techniques or films which value other elements above movement. Some might even discount Jeff Scher's work for its heavy reliance on rotoscoping and his dismissal of traditional film form. Instead of basing films on scripts and storyboards, his films are graphic realizations which eschew narrative for visual form and loopy editing which only find linear meaning in the Rorscharch of the Kulechov Effect.

above: from Garden of Regrets

Cunning Stunts, for example, is a piece I first saw in a bar in Flatbush, Brooklyn, at a time when I only knew Jeff's commercial work. We had both worked on pieces for an HBO special and he had done an opening for Angelika Film Center which had replaced one done by my former studio as well as work for the New York Film Festival and the Sundance Channel which I had seen. 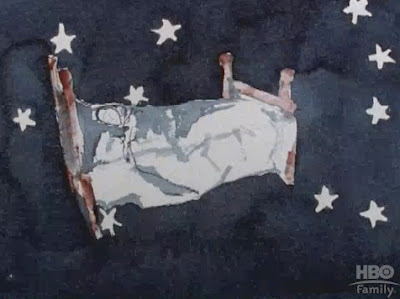 For the HBO special he created a title animation inspired by Little Nemo in Slumberland. Instead of tackling Winsor McCay's tight painting and draughting, Scher applied his own style -a loose watercolor based heavily on rotoscoped footage. The majority fo his commercial films utilize spilt screens and multiple projections. Films in the extended family descended from Pablo Ferro and his Burlington campaign of the late Sixties. At the moment I first caught Cunning Stunts out of the corner of my eye in bar blissfully free of animators, I did not know Jeff Scher was -in addition to being a painter/artist/filmmaker/animator -a pornographer. 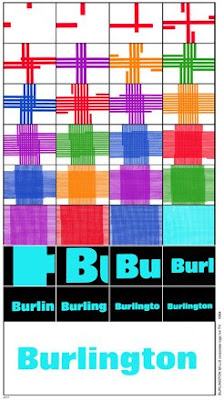 above: Pablo Ferro's Burlington Mills design
My favorite of his films, superficially distinct from the rest of his work, is Sid. It's a single perspective made up of two or three jump cut shots. No painting, no rotoscoping, no multiple projections. The only cinematic gimmick is an overcranked camera about halfway through when the filmstock shifts from black and white to color. In most of his films, Scher speeds up his events. Here, time slows. In this film, a bug eyed dog plays with a steak shaped chew toy. The whole film is shot from the human's perspective as the dog grabs it and is spun repeated through the air.

The external signifiers all differ from his usually kinetic approach, but the internal logic is true to form. The foundation of the film is the graphic image of a goofy looking dog. The film proceeds from that starting point. I imagine sometime Jeff was playing with this dog, spinning it around, wrestling over its toy -and said to himself "this is one crazy, funny looking animal" and he ran for his Bolex.

Magic happens. Film becomes the medium for sharing an unshare-able private moment. Instead of telling us at the dinner table how his dog can do 360 degree turns while holding onto a plastic sirloin, he has shown us the experience. With this little film, a pure emotion is captured -the transcendent joy of play.
Posted by roconnor at 8:09 AM