This One's For Fran Krause

January 29th, 1995 was the only the second time I went to Williamsburg, Brooklyn.  To this day I find the lack of tricorner hats and butter-churning greatly disappointing.

I was on my way to Aaron Cantor's for a "Super Bowl Party."

On the way I was stopped by a multi-cultural group of men. 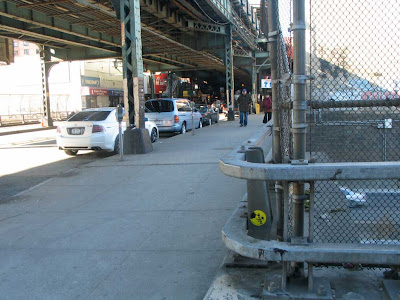 (above) The Location.  The van really did break down!

One of them step up and says, "Hey, can you help us with a couple bucks?"

Another, pointing to a van parked at the curb, "We're on our way to a gig and our van broke down."

A third, "You might have heard of us -we're Spyro Gyra."

My college days of scamming Columbia House made me very familiar with the concept of Spyro Gyra.

I made a wide circle and continued on my way.

Later that evening we turned off the football game after one quarter and watched Wacko on VHS.

Email ThisBlogThis!Share to TwitterShare to FacebookShare to Pinterest
Labels: friends

I got spirogyra real bad once. Always wash your hands before you eat, and never buy a chuirro on the subway platform.