Crazy For You, But Not That Crazy

I showed Betty Boop's "Crazy Town" in class the week as an example of Fleischer animation from the early 1930s.

I explained a little about Grim Natwick, and the evolution of Ms. Boop and vesitigial dog boyfriend, Bimbo.

The film is full of Fleischerisms (just not the train track in the background), and I really liked Bimbo's walk in it.

I'm guessing it's by pre-Shamus Culhane.

It's possible that the generations of pulldowns and transfers have caused me to miss a drawing -but I doubt that I'd miss two.  Not even the same one twice.

Oh, and on ones (except where the pulldown adds a frame).

So right off the bat, we're dealing with a 14 frame walk.

So maybe that's why it's compelling.

#6 is sort of a sneak, but in the rubber-hosey version of a leg, the sneak is a slide.

And with #7 the slide becomes a pop.

His knee is in the same position, but his foot tilts north -allowing for #8: the contact drawing.

The second half of his walk is slightly different from the first.

This time/distance is "made up" in drawing #11 which "settles" for a frame at the "passing point" -Bimbo's tallest moment.

This sneaky rubber hose shuffle reminds me of a confession by Tony Eastman.  It took him a few weeks to figure out how to make "Kids Next Door" walk because of their outsized feet.

Bimbo has similar deformities -but his bone/muscular disorder that allows his joints to bend in inconceivable manners compensates for that.

And in other news (and in an effort to keep up with our visitors log -sorry to those I've missed), Maciek Albrecht stopped by yesterday on a social call.  Strangely enough, I (not pictured) was also wearing a yellow shirt. 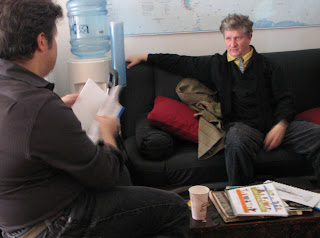