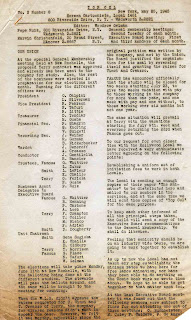 At the special General Membership meeting held at New Rochelle, the proposed Terry contract was approved and already has been sent to the company for study. Also, the rest of the nominees were elected in preparation for our elections next month. Running for the different offices are:

The elections will take place Monday, June 11th at New Rochelle, with the balloting being done at the different studios. The stewards will pass the ballots around, and the same will be brought to the meeting for the counting.

When the WLB didn't approve the raises requested for C. Vinci and T. Creazzo of Terry, the company, for diverse reasons didn't want to appeal the case.  However, we felt it was worthy, especially since the original petition was written by the company, and not by the Union.  The Board justified the organization for its zeal by reversing itself and granting the raise for Vinci and Creazzo.

FAMOUS has announced officially that the studio will be closed for two weeks starting July 23, to give two weeks vacation with pay to those working in the company for more than one year, and one week with pay and one without, to those working over six months but not one year.

The same situation will prevail at Terry with the vacations starting the July 9th week and everyone returning the 23rd when Famous goes out.

To our request for even closer ties with the Hollywood Local we have received a very enthusiastic letter agreeing on the following points:

Establishing a uniform set of initiation fees to work in both Locals.

The Local is sending us enough copies of their paper "The Animator" to be distributed here and mailed to our members in the services, and at the same time we will send them copies of "Top Cel" for the same purpose.

To keep each other informed of all the principal steps taken, the Guild will send a copy of the Executive Board recommendations to the General Membership.  We shall do likewise.

Feeling that seniority should be on an industry wide basis, we are going to work together to establish it.

As up to now the Local has not taken any step establishing the minimum rates we have here for free lance animation, nor have they been able to do anything on the Comic book work we wrote them about.  We hope to be able to get together on that matter soon too.

At the last Executive Board meeting it was found out that the following members were subject to fines for not attending one out three meetings: O. Buchheister, M. Cole, P. Caldera, P. de Angel. 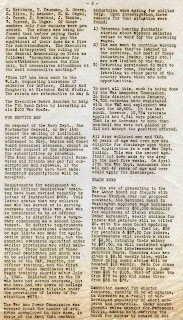 E. Erickson, V. Feurman, G. Green, E. Klien, O. Messmer, EM Regal, C. Renza, I. Rowland, J. Tanaka, W. Turner, D. Ungar.  Of those members only four excuses were presented.  The others are being informed that before paying their June dues they have to pay the equivalent of their dues as a fine for non-attendance.  The Executive Board interpreted the ruling by the General Membership on fines as follows: "Accepted excuses for non-attendance excuses the fine only, but necessitates attendance at the consecutive meeting."

"Form 10" has been sent to the WLB requesting increases of salaries for LaFleur, Oldbury and Dougherty at Fletcher Smith Studio.  The raises are retroactive to May 2.

The Executive Board decided to help the 7th Bond Drive by investing in six $100 War Bonds.

Requirements for assignment to Marine Officer Candidates' training have been revised recently by Letter of Instruction #969.   This letter states that any enlisted man who has served or is serving overseas during this war, and who is considered to be of officer caliber, is eligible for a temporary commission as a second lieutenant.  No definite requirements concerning educational standards or age limits are made for application under this policy, but the physical standards specified under earlier provisions are still maintained.  Three hundred of these officer candidates per month are to be selected and returned from units of the FMF, Pacific for officer training, and the first group of these candidates will begin training shortly after July 1, 1945.  Enlisted men in the US who have not served overseas, but who have had two years of college education, remain eligible under the provisions of Letter of Instruction #878.

The War Man Power Commission was worried about the number of veterans unemployed in this area, in spite of the fact that certain industries were asking for skilled help.  Upon investigation, three reasons for that situation were found:

2) The men want to continue working at trades they've learned in the services, but most of these industries (radar, radio etc.)

3) Returning servicemen do want to work near home, instead of traveling to other parts of the country where there are more opportunities.

To meet all this, much is being done by the War Manpower Commission.  In this district since January, 74,700 veterans have registered with the WMC and employment was found for 48,600.  In the last month, however, 12,734 veterans applied and 5,841 were placed.  That is an increase to more than one-half who were not placed or did not accept the position offered.

On the eve of presenting to the War Labor Board our dispute with Famous Studios over our proposed contract, the National Board in Washington approved wage increases averaging nearly $50,000 annually for employees of the Disney studio.  Under agreement, weekly minimum for inkers and painters will be tilted $5 with the same boost applying to all apprentices.  That is, $35 for painters and $37.50 for inkers.  Inbetweeners will receive a raise of $2.50, bringing their salary to $37.50, as will assistant supervisors in the inbetweeners and painters departments.  Checkers also are given a $2.50 weekly hike, while those doing comic strips will be boosted $10 weekly.  Rate for class one in the comic strip department jump from $95 to $105, that of class two from $75 to $95 and class three from $65 to $75.

Exhibitor demand for shorter features, running 35 to 45 minutes, is forseen as a result of war-developed popularity of short subjects and newsreels.  Oscar Morgan general sales manager for Paramount shorts, admits he's carrying the torch for shorts by reason of his 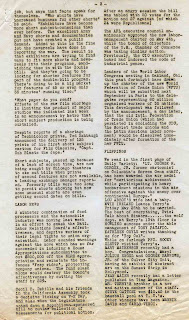 job, but says that facts speak for themselves.  "War shorts have increases business for other shorts" he said. "Exhibitors have become more short subject-conscious than ever before.  The excellent Army and Navy shorts and documentaries put out have created a public demand.  Added to this is the fine job the newsreels have done in reporting the war.  The result is that exhibitors are trying to find ways to fit more shorts and newsreels into their programs, sandwiching them in with the double bill.  And they're going to be looking for shorter features for part of the double-bill program.  There's doing to be a big market for features of 45 or even only 35 minutes' running time."

"What paper do you read?  Effects of the raw film shortage in limiting the product of major studios was indicated last week i an announcement by Metro that short subject production is being curtailed.

Despite reports of a shortage of Technicolor prints, Ted Eshbaugh announced the delivery of 125 prints of his first short subject cartoon for Film Classics, "Capt. Cub Blasts the Japs."

Short subjects, passed up because of a lack of screen time, are now being sought by Chicago theaters to eke out bills when prints of second features are not available, a leading exchange manager reported.  Formerly bills were too long to permit shorts showing but now some unusual shorts are even getting second dates on bills.

A sinister combination of food processors and the automobile industry was moving last week in an effort to smash the NLB' effectiveness, and deprive workers of their legal rights to union organization.  Labor sounded warnings against the move which had so far succeeded in inducing a House Appropriations subcommittee to cut $500,000 off the NLRB appropriate and reinstate the infamous "Frey rider", protecting company unions.  The fund slash alone would destroy the Board's effectiveness by cutting the staff by 22%.

Cecil B. DeMille and his friends in the California Assembly took a decisive licking on VE Day, and also when the legislators voted down a Republican-sponsored bill to outlaw collection of assessment for political actions.

After an angry session the bill was tabled with 50 votes for the action and 27 against (of which 24 were Republicans).

The AFL executive council unanimously approved the new labor-management charter on May 4th, while the board of directors of the US Chamber of Commerce was taking similar action.  Previously, the CIO executive board had endorsed the code of industrial peace.

Leaders of the World Labor Congress meeting in Oakland, CA this past fortnight have drawn up the charter of the new World Federation of Trade Union (WFTU) which will be submitted next September in Paris to the delegates representing 60 million organized workers of 35 nations.  This development was followed by the announcement, a day later, that the old International Federation of Trade Union (which had persisted in excluding the CIO, the Soviet trade unions and the Latin American labor movement) would be dissolved immediately after formation of the new FWTU.

We read in the first page of the Daily Variety: "Lt. George R. Giroux, Jr. former cartoonist on Columbia's Screen Gems staff, has been awarded the air medal for "meritorious achievement while participating in heavy bombardment missions in the air offensive against the enemy over continental Europe".

Lou Abbot's wife had a baby.

Evie Ireland leaves Terry's Friday May 25th to be married.  The best of everything, Evie!

Julius Engel and George Barrows, Jr. of the Culver City Unit, having an exhibit of abstract art on the Sunset Strip in Hollywood.

Jean Maier recently had a letter published in Time Magazine.

Mr. Terry's brother is a new and active member of the staff.  Steve Gattoni won $10.40 in the baseball pool at Terrytoons.  Other winners have been Mannie Davis and Carlo Vinci. 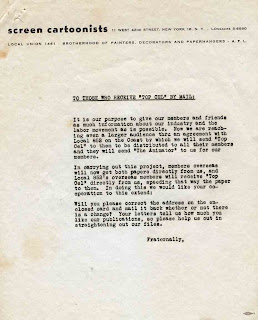 TO THOSE WHO RECEIVE "TOP CEL" BY MAIL:

It is our purpose to give our member and friends as much information about our industry and the labor
movement as is possible.  Now we are reaching even a larger audience thru an agreement with Local 852 on the Coast by which we will sent "Top Cel" to them to be distributed to all their members and they will send "The Animator" to us for our members.

In carrying out this project, members overseas will now get both papers directly from us, and Local 852's overseas members will recieve "Top Cel" directly from us, speeding that way the paper to them.  In doing this we would like you cooperation to this extend:

Will you please correct the address on the enclosed card and mail it back whether or not there is a change?  You letters tell us how much you like our publications, so please help us out in straightening out our files.
Posted by roconnor at 7:32 AM

You're providing a great service in posting all these TopCel issues. They should be recorded for history's sake.

I really like reading the labor perspective in these issues, little snide comment there about Cecil B. DeMille.