This is a rough storyboard Brian did for a sequence in the PBS documentary series Make 'Em Laugh directed by Michael Kantor.

It parallels the opening sequence we made for the episode which illustrates classic situation comedy tropes. 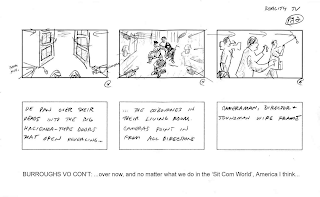 By the end of the episode, reality shows are suggested to be a replacement to the sitcom -at least in terms of popularity.

We'd rather watch untalented people make fools of themselves than watch great comedians like Jackie Gleason.

This is also when I first heard of Teela Tequila.

So you can learn something new on every job.

We used a pretty stiff photo cut out style here.

We have limited material to use, basically a single photo for each character.

That meant the animation would need to behave like traditional under camera cut outs.