We've been contracted to do the graphic for the NEH/PBS initiative "Picturing America".

This has mostly been the title sequence and typesetting with a couple other things here and there. That's in addition to the handful of full subjects we've produced. 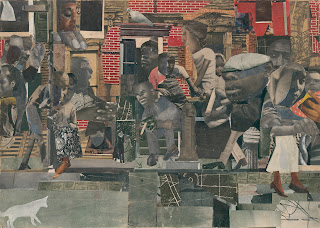 Last week we began discussing with Gail Levin a way to illustrate the construction of Romare Bearden's "The Dove".  The impetus behind this idea was the voice track of his niece describing the artist's thought process.

We thought it would be interesting to document the process as we go along.

Today we got the audio cut.

Step One: Listen to the voice over a few times.

This little bit is deceptively difficult.  When it's complete it should easy and obvious, but getting there might be tricky.

The primary concern in creating illustrative graphics about art is to be "true to the subject."  At least in these educational films.  Reverence is appropriate.

What is difficult here is that we'll need to show the construction of the collage without the benefit of pulling apart the layers from the original.

Our next step will be to sketch a rough concept board.
Posted by roconnor at 7:03 AM