We did seven little animated inserts after a Hirschfeld illustration for Carol Channing: Larger Than Life which premiered at the TriBeCa Film Festival yesterday. 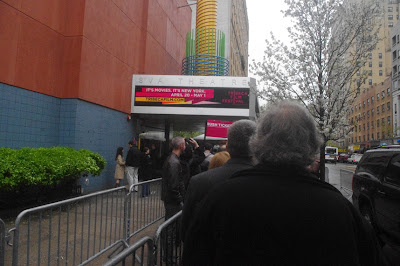 Very often we'll screen lots of different cuts on these sorts of projects, sometimes sitting in the editing room to offer thoughts on the overall structure and content of the film.   By the time of the premiere, it might be possible to recite the film line for line.

In this case, we pretty much stuck to our sequence only screening a very early cut.  So it was like seeing the film for the first time. 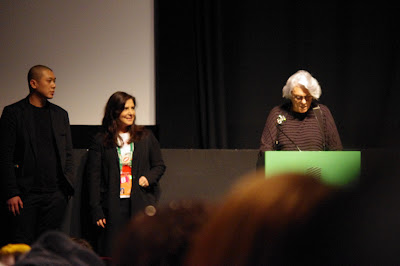 Tyne Daly delivers a note from the star who couldn't make the screening.  Director Dori Berinstein to her right.
Turns out to be a terrific film.
Dori Berinstein, the director, and Adam Zuker, her editor and co-writer, present a loving and layered portrait of an iconic performer.
One moment is particular touching (amongst many touching moments): with her stage performances numbering into the high thousands, Carol Channing has the reputation of having never missed a single show.  She steps into correct that, she did miss a show -the second act at least -after contracting food poisoning and vomiting all over the stage.  Even while taking treatment for ovarian cancer she would fly to New York after her Saturday show for therapy only to return to the stage in whatever city the tour had landed for Monday.
What I find particularly touching is her dedication -not so much to "craft", although her love of performing is contagious -but to her fellow performers, and moreover her audience.   She says something to the effect, people save up a lot of money and more importantly go to a show to have an experience they'll remember forever.  They're doing all of that to see her and she refuses to let them down.
She shows a commitment which we all should make to our work.
Carol Channing: Larger Than Life has three more screenings this week. And will next show at Hot Docs in Toronto.
Posted by roconnor at 7:46 AM

Lovely piece about a really wonderful lady. Carol and her husband Harry came to NH twice - once in 2007 and again in 2008, to help me raise money for AIDS in this state. They were amazing and tireless in their efforts and raise tens of thousands of dollars. Being with them for several days changes your life and perspective forever.