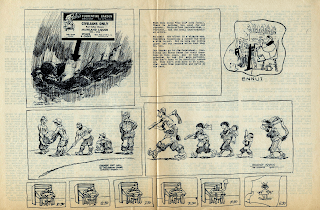 With this issue "Top Cel" goes formal. There is nothing too good for our readers. Photo-offset reproduction... Pictures... and the usual typo-graphical errors.

We admit the effect is a bizarre one. Something resembling a bowery bum with a silk topper. But we love our little paper and our readers write that they do too.

Our thanks go to Jim Carmichael, Geo. Giroux and Morey Reden for their drawings on this page. And we take this occasion to ask for more cartoons. They don't have to be carefully rendered. They don't even have to be clean. Just make them plentiful and we'll do the rest.

At our last General Membership meeting our yearly elections took place and the following members were elected:

The Union conducted negotiations with Willard Pictures and as a result have signed another contract.  This contract has some features that are better than the Fletcher Smith's.  The company will give its employees one working day vacation with pay for each month of employment, each worker shall receive payment for all accumulated but unused vacation credit.

A week ago last Thursday the New Case Committee of the WLB accepted our contract dispute with Famous.  The only points in dispute are, 1) the duration of the contract (the Studio desires a two year contract), 2) the phraseology of the union shop clause, and 3) the so-called "most favored nation clause."  The Union desires to be able to accept a contract which pays less than Famous if the membership of Terry so desire.

The major point of disagreement, of course, is in salaries.  the Union is attempting to obtain $105 for animation with a range up to $150; $60.00 for assistants with a range up to $86; $37.50 for Inbetweeners with a wage range up to $55.00 (and the same for Inkers).  $35.00 for Painters with a wage range up to $50.00.  (The last three salaries were the one approved by the WLB in the Disney case).  Since the Famous attorney requested its client to withdraw its previous offers, the Union is not certain of what stand the company now intends to take.

At the June General Membership meeting our members demonstrated their understanding of the issues of the Decorators strike and their sympathy for the action that had to be taken, by voting overwhelmingly to accept and vigorously carry out the Painters request for a boycott of all motion picture houses until the dispute is settled.  Our members were only too happy have this opportunity to go on record in support of Herb Sorrell in his fight against Bioff unionism and Producer-Union coalition.

Despite the plans of educational and other non-theatrical groups of film people, the Army Pictorial  Service has been burning millions of best of film.  Much of this film would be of great interest in an educational light and the quality of many of the productions is of a much higher caliber than is possible of attainment by the average 16mm studio.

An action like this help bring to a head the moot question of whether much of the valuable property of the Government, for which taxpayers have been paying heavily, will be destroyed wantonly just because some people feel that business shouldn't have to compete with these mountains of unused materials.

Somehow it strikes us as a sad commentary on our powers of organization when we must destroy valuable materials to create phoney production schedules to replace these very same items.  If business lacks the inventiveness to create new fields, it seems that Government ought to take a bigger hand in seeing that employment and production are maintained without resorting to this phoney production.  If products exist and there is an abundance of labor, cutting down the hours of labor or creating new markets seems the more intelligent approach.

LETTER FROM A PILOT

"....The group has pulled a couple of mercy missions flying liberate allied PWs out of Germany.  The first group the boys hauled out were Frenchmen most of them prisoners for five years.

These lads here have seen their buddies blow up or burn without turning a hair, but the Frenchman trying to kiss their hands and crying with joy at the sight of Paris was too much for them.  The boys all came back without a cigarette, stick of gum, and without having eaten for 16 hours.

I asked them if they didn't get sandwiches. 'Oh yeah, but they weren't any good so I just gave them to the PWs.'  Such guys!  I happen to know you'll eat the luminous paint off the instrument board after 5 hours of formation much less 13 or 14 hours of that brain-binding-back-breaking stuff.

This is the nicest thing we've yet used our murderous skill for and somehow makes one feel that it is maybe worth it.

The 'hottest lick' was our radio operator holding an animated conversation when the only words Sgt. Jones knows in French are 'au revoir'.  Jones gave the Frenchman his cigarettes (he immediately gave all but one to his buddies) and a stick of gum.

The Frenchman, not to be outdone, tried to give the Radio gunner his wornout shoes -evidently his most precious possession and when Jones refused them, the Frenchman tried to kiss the Sgt. who was quite embarrassed.  They then lapsed into just sitting and smiling at each other and about every ten minutes they'd break into hilarious laughter.

Who can deny that T/Sgt. Fay F. Jones, Radio Gunner from a jerkwater town in Utah, speaks more fluent French than the diplomats at San Francisco?"

TRADE NEWS
"Reconversion period, to which the government and industrial planners have been alerted, find the picture industry in what is considered by trade analysts as the stronger financial position in its history.    But a possible reversal in the trend of ever-rising box office grosses and rentals, the cash position of majors, strengthened by boomtime earnings, will be further bolstered along with other industries by proposed government "relief" measures slated to become effective about January 1, 1946.  Excess profits taxes alone for the six majors during the war, including the first quarter of 1945, total more than $170,000,000.  Any reduction in excess profits taxes figures importantly in calculations for postwar film business profits." (Daily Variety May 31, 1945)
Walt Disney's Pinocchio may be revived by RKO Radio this Summer, it was reported.  Five test engagements are now being set up, and if the picture is successful in the test spots it will be released for general distribution.
Fred Quimby signed a new term pact with Metro to continue as cartoon producer and short subjects executive.  Quimby joined the Culver City lot shorts department in 1926 and later launched the cartoon studio.
Dave Fleisher was reported resting satisfactorily after an emergency appendectomy last week.
Hugh Harman Productions has filed suit for $1,073,900 damages against 20th Century Fox charging breach of contract with Harman to make 936 foot sequence, combining animated cartoons with live actors for "Billy Rose's Diamond Horseshow", for $100,000.
Morey and Sutherland Productions, Inc. is new company tag for Larry Morey and John Sutherland cartoon producing organization which releases through United Artists.
George Pal has suspended production on all entertainment films in order to concentrate on a heavy assignment of technical pictures for the war and navy departments.
FLIPPINGS
News from the Repair Base (San Diego) Unit.  John McGrew is about to be discharged soon,  Al Tarter is seeking a transfer to Vine Street. Jack Bruner is already there. Gene Hazelton was transferred to Hueneme last year.  John Law Walker will be released soon.  Jack Cosgriff was released last year.  Only Animation artists remaining there are Bob Matz (Schlesinger) and Bob Gunther (Disney).  John Karas (Disney) was sent to the Navy Hospital at Bethesda MD and Herb Kornfeld and Leo Salkin were sent to Pearl Harbor.
Patricia Stockford's engagement was announced May 27th at a tea.
Marcia Kaplan and Marie Scheiter donor at the blood bank last week.
Sgt. Glenn Couch announces happily the arrival of Andrea Adele on May 23rd.
John McLeish in Camp Roberts.  Dave Hilberman in Camp Crowder.  Dick Alexander in March Field.  Steve...  Urania Kikes' Marine Captain hit California last week at long last.
Bernice Bernstein left Famous.
Milton Wohl was married last week.
Lester Schudde is a proud papa again, to a 6 pound baby gal, May 25th.
Howard Baldwin was for a few hours in Hollywood and is back in Kansas about to leave for overseas.  Here's hoping Mr. McAvoy is feeling like himself again.
Walter Gleason visited Terry's while on furlough from the European theater of war.
Dick McDermott  has a whole page of drawings in "The Leatherneck", the Marine magazine.
Dick Kelsey is out of the Marine Corp.  Eric Cleworth and Al Hank are still in the Pacific.  George Baker and Sad Sack are gone to the Philippines.
Discharged Capt. Bill Williams is back in the States with six awards or citations, after 3 years in the Pacific.  At a party given him we saw Sam Cobean, Regie Massie, Wilbur Streech, C. L. Hartman, Nick Gibson, John Barlow, etc.
Bob Janness became the the father of a baby girl.
The Famous Animators plan shindig.  Watch this space for date.  (Any help or advice on entertainment will be greatly appreciated)
Somebody screwed up and George Giroux got promoted to 1st Lieutenant.
Art Babbitt from the Pacific sends his regards to Tytla, Baker, Cobean, Massie, Roman, etc.
Dotty Kneitel and Ruth Forrest celebrated their birthday last month.
Lt. Freeman Silva still at Torney Hospital in Palm Springs.  Thanks for the card!
Ida Gottfurcht sporting her annual feathercut.
Katheryn Chaille and Ruth Lynch requesting a Withdrawal Card.
M. Gollub from San Diego, greets his friends.
Wendell Ehret's cartoon book was published by McBride Co. and release May 26th.
HOLLYWOOD STRIKE (cont.)
Herb Sorrell knew he was starting something when the Conference of Studio Unions decided to back the Decorators in their fight to democratically choose the bargaining agent they wanted to represent them.  The IA President and Producers coalition has used all the tricks in the book to win their point, such as firing workers, forcing IA members to become scabs, taking autocratic control of Local 44 (the Local being used as the excuse for the show down, etc.  It is unfortunate that for diversal reasons, those usually interested in democratic unionism in Hollywood decided to stay out of the fight.  But so far, that has not prevented Herb from achieving the complete success his cause deserves.
Showing that it remembers very well how much the Cartoonists owe to Herb Sorrell and the Painters, the Metro Unit in Hollywood made a partial repayment by contributing a check for $64 to the striking Decorators.  We are happy that the fellows on the West Coast haven't forgotten that without Herb's abundant donations of advice, work and money, the Metro Unit never would have been organized (and consequently the Guild)  and that without Herb and the Painters, the Disney strike never would have been won.  Although the amount is small in comparison to the hundreds of dollars the Painters and Herb personally gave us, it shows that we haven't forgotten our debt.
Posted by roconnor at 6:46 AM