Two days late for the centennary of one of the most powerful union leaders of all time, a man who's checkered career as President of the Screen Actor's Guild included informing to the FBI, securing unprecedented profit-sharing for members and a backroom deal that bent the law and netted him millions, here's the next issue of The Top Cel. 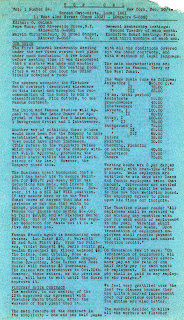 The first General Membership Meeting under the new fines system took place under much confusion.  A few hours before meeting time it was discovered that a mistake was made and another group was occupying the meeting room.  After a wait of one hour the Union finally obtained a room.

The members accepted the Fletcher Smith contract (described elsewhere in this issue) and accepted the recommendation of the Board to a classification, Film Cutters, to the Famous contract.

The Union and Famous Studios will appeal to the War Labor Board for approval of the raises for 5 Animators, 1 Background Artist and 1 Inbetweener.

Another way of obtaining these raises would have been for the Company to have established a wage range within which they could have given increases.  (This refers to the voluntary raises which can be given by the company without WLB approval, providing the Studio stays within the strict limitations of the law.)  However, the Company nixed this.

The Business Agent announced that a plant has asked him to secure Painters for $38.75 per week, AFTER tax deductions are made, and Inkers for $42.10, also it is a SIX DAY WEEK position.  If any member here or in the West Coast knows of anyone that has experience or any one that wants to change, please contact Pepe.  At Famous our Inkers are making $32.00; at Terry $29.00 and at Fletcher Smith $32.50.  Out of that you get the regular deduction for taxes but it is a five day week job.

Famous Studio again is announcing raises.  Leo Zucker $10, J. Walworth $5 and Ruth Platt $2.  From the Painters, Violet Szigeti $4; Doris Zvirin $2; Beulah Kirschner $2; Eileen Melamed $2.  The Inkers, Jean Ortelli, Rose M. Bracco, Tillie Lippman, Rhoda Grapek, Norma Spaulding, Nona Turner and Rose Haskel will receive $3 increases.  The raises are retroactive to Oct 30th.  However, these raise, as the previous ones, will have to wait until the Board approves it.

The members, in our meeting of the 12th approved our agreement with Fletcher Smith Studios, after the workers of that plant OKed it.

The main feature of the contract is its simplicity -one and one half pages with all the conditions covered by the other contracts, and with a minimum of legal language.

The main characteristics are the same as Famous, Terry or the West Coast.

The Wage Scale runs as follows:

Working hours are 8 per day, 40 per week with over-time after 8 hours.  Male employees are entitled to six days sick leave and females twice that amount.  Grievances not settled within 10 days shall be taken to the New York Mediation Board.  The employer agrees to place upon his films our insignia. 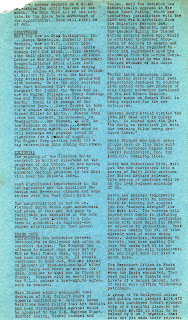 ... to become members on a $5.00 initiation fee until the end of the month.  We hope that all the artists in the place take advantage of the opportunity.  Dues will start as of January.

Bart Doe now in Camp Livingston LA... Renee Sabatello, formerly from Warners, now in NY... Terry Lind back to work after illness... Myrle Munson left for Miami... Grim Natwick, star ball player, at Lantz... Mildred Levine is Sam Buckwald's new secretary.  Congratulations!  Ethel Miller left Famous... Art Babbitt, after taking special course at the Museum of Natural History in NY with the Marine Corp Aviation Intelligence, graduated with honors.  He is the only enlisted man that attended that school... Margaret Coy joined the Waves and is now at Hunter College... Denny Cunningham and Frank Kelling at Fletcher Smith.  Frank is in charge of the animation department... Jerry Dvorak in town for a couple days... Bernadette and Sidney Pillet at Lantz...Elaine Cone joins her husband, Lt. Grossman in Washington... Dan Noonan, QM 1/C, in Los Angeles on furlough... Howard Baldwin moving again... Pepe says he will exchange popular brand of cigarette for a pound of sugar... The Signal Corp getting ready for a big celebration this coming Christmas.

The signing of the Fletcher Smith contract is another milestone in the progress of our Union. We are moving forward to the point where every animated cartoon producer in the East will bear the Union's label.

Most significant improvements in the new agreement are the excellent Vacation and Severance clauses and some raises over the West Coast minimums.

Our congratulation go out to Mr. Fletcher Smith whose open mindedness and sense of fair pay did much to facilitate the execution of the contract.  We look forward to a long term good-will in employer-employee relationship in that plant.

Conferences are scheduled between Cartoonists in Hollywood and Metro on contract dispute.  The Company has offered to accept wage scale set by WLB in Walt Disney case, but offer has been nixed by union.  If studio continues to hold out, SCG may insist on payment of time-and-one-half after eight hours and check up system for dues, similar to that now in force at Disney.  Dispute will be certified to the WLB unless a last-minute agreement is reached.

Walt Disney studio announced that decision of US Circuit Court of Appeals confirming a National Labor Relations Board ruling that Art Babbitt had been discriminated against would be appealed to the Supreme Court.  Gunther Lesing, Disney counsel and  VP, said the decision was diametrically opposed to WLB ruling, which has concurrent jurisdiction with the NLRB and was a deviation from the Selective Service Law.  Under ruling, Babbitt, one of the leaders during the Disney strike several years ago, would be entitled to recover thousands of dollars in salary and company would be required to offer him employment upon his discharge from the Marine Corps.  Babbitt declared he was discharged because of his union activities.

Walter Lantz announces plans for making series of four reel abbreviated features to combine live action with new process of clay figure animation developed by him and Edward Nassour.  Studio space on Sunset Blvd. is being acquired for the new enterprise.

General Henry Arnold visited the 18th AAF base unit in Culver City.  He stated that the Unit "is doing an excellent job with the training films being produced there".

Morey and Sutherland Prod. will put two new characters into a series of Daffy Ditty cartoons for United Artists release.  This series of cartoons will be on the 1945 release schedule of UA.

Metro has shelved temporarily all other activity to concentrate in tuning out special job for "Anchors Aweigh" for the Main Lot.  The workers will expend next month in picturing large mouse character performing dance with Gene Kelly for fantasy sequence in production.  Task requires 600 ft of film already shot of actor doing dance.  Animators, according to Variety, has been working for over two weeks and it is expected that job will necessitate day and night work for over a month more.

The Paramount office in Paris had only two pictures on hand when the Nazis evacuated.  They were Gulliver's Travels and Lives of a Bengal Lancer, both of which were getting tremendous patronage.

A group of 24 Hollywood unions and guilds have pledged $118,475 in bond purchases toward sponsorship of a hospital plane.  An additional $6,525 is still to be raised by 6 or 7 organizations that have not yet made their reports.
Posted by roconnor at 7:45 AM