Our two year project of chronicling the 2008 election with Steve Brodner came to a close on Tuesday.

The approach to editing this film was different from all the others. Even so, the final structure demonstrates what we hoped (I hoped, at least) this would experiment achieve. Illustration provides a specific way of seeing, in this final piece the images (and the ellipses) tell a story that words could not speak.

This time we had the soundtrack as a starting point. On Monday Gail and Ben went to Bennett Studios in Englewood to shoot Jon Faddis playing the National Anthem.

This told us how long the piece would be.

Unlike the other videos, I began by putting on the opening title sequence and blocking in the end signature and credits. Then the detail work.

The edit started from the back.

Initially, we discussed using Obama's 2004 convention speech as a lead. We'd intercut with footage Faddis performing while Brodner drew and then mix in a clip from Obama's Tuesday night victory speech.

The audio always comes first. The sound tells you what the picture is. Even when editing sound and picture at the same time the flow of the audio takes priority.

John Hubley famously recorded all of his soundtracks before beginning animation. Not just voice, but music. Tissa David asked him "how do you know it's going to work in the film." His response, "I listen to the track. If its good and it works, the film will be good and it will work."

Since we were working here with a defined measure of time (3 minutes, minus open and close), we decided to fill in the finale first to ensure it received the proper time.

We decided on two clips from Obama's Victory Speech, the second part echoing the "red state/blue state" passage of dichotomies from his '04 Convention Speech which we used for the first Naked Campaign film in January '07.

From there it was back to the beginning. First was Frederick Douglass. 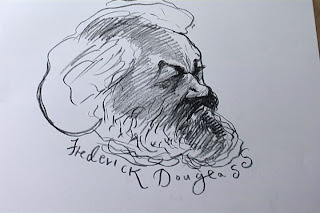 This is also the longest of the portraits.

The editorial plan was to draw the viewer in with an elegant, almost elegaic pace. This portrait starts from the blank page and works to completion in 36 seconds.

Over the course of these films, we've done a lot of "undercranking" or speeding up footage to the construction of a drawing. In this, we purposely moved through the drawing process with slow dissolves and kept it all (mostly) in real time.

Intitially, Louis Armstrong was slated as the second profile.

He was a casuality of time. Just not enough room.

The next guy, Jackie Robinson, starts with his features already established. We see two strong lines being drawn. 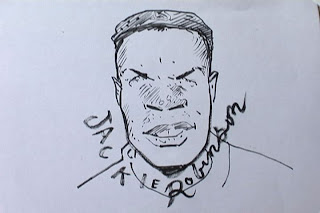 The structural intention was to start Douglass from point zero and have each subsequent portrait begin later in the construction of the drawing.

We had a detailed discussion about who would be represented in this piece. At first, I was a proponent of Shirley Chisholm seeing her as more of an extraordinary individual. Rosa Parks, as courageous and noble as she was, represented the inevitable. Brodner made the irrefutable point that she was a "game changer". That her action, inevitable or not, changed the world and she, alone, is responsible for that. 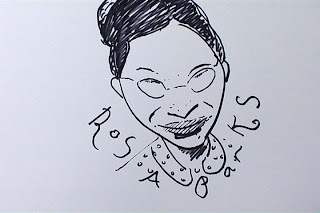 Brodner created her with heartfelt warmth in this illustration. His definition of her action also clarified what this final piece of the campaign should be.

At this point, there was no need for the 2004 speech and the intercutting with Faddis was convoluted and unnecessary. Direct and simple clearly became the way to go.

For Dr. King the framing was tricky. That sort of effected the overall editorial philosophy of the piece. 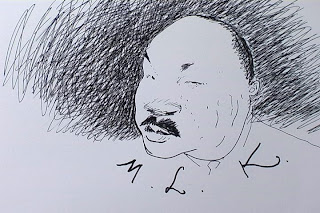 His section fades out as the camera moves trying to frame him while the finishing touches are put on his moustache.

That brings us to the impressive portrait of Justice Marshall. 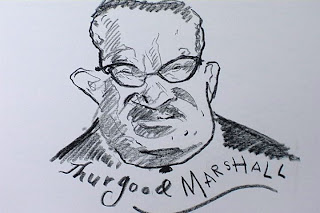 We only show his robes being colored in.

Lastly, the speech fades up and Obama is drawn with several parts already on paper. 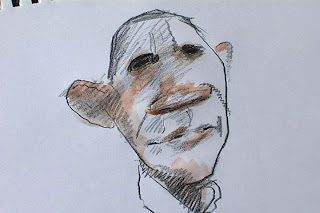 He starts out, improbably enough, a little like Lincoln. As his features form, the portrait remains open ended. We don't see his eyes. The line is soft and open. His features recede into shadow. He is still a question.

A question -what's that? Watercolor fills in tone as if to say all the men and women leading up to this point simply provided the framework. Here we have the fulfillment of a promise described with pencil, pen and brush.

Glad I finally got to see this (my computer kept seizing). Great work... it's simple and straightforward and that's what makes it work so well.