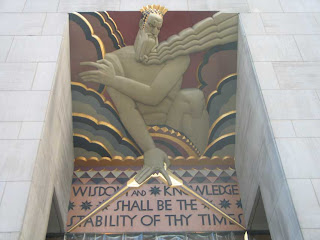 One of the benefits of the old days of working at The Ink Tank was its proximity to Rockefeller Center.

Unlike many tourist attractions -The Empire State Building is just an office building, The Statue of Liberty is well out of walking distance -Rockefeller Center was designed for life in New York City. It's possibly the pinnacle of urban architecture in America.

The friezes on the facades of each building in the original complex were created by Lee Lawrie.

As Rockefeller Center is nothing but superlatives in the world of architecture (and American achievement, in general) these reliefs are superlative in the realm of Art Deco sculpture. 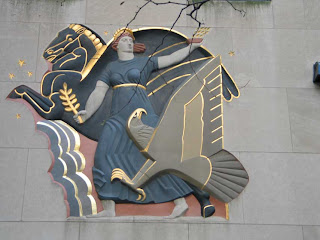 1) It captures the spirit of the age. Social realism blended effortlessly with Art Deco angles, detailing and color. This combination presents a thoughtful optimism for the state of the nation during the Great Depression.

2) It presents patriotism as communal. The national symbol, the eagle, flies throughout Rockefeller Center. In the image above it flies alongside the maiden. Such images of community are represented all through the building complex.

3) It connects the presents to past, placing itself (and us) within the continuum of history. These buildings were made by men long dead, they honor those who tread before them and invite us, the living, to share the space they created. 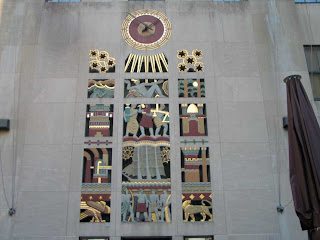 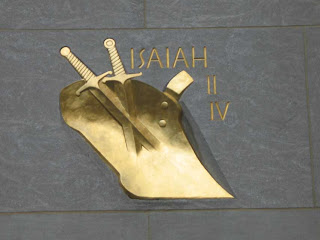 I was introduced to Lee Lawrie's work at The Ink Tank. That studio occupied the space created by and once used by Bertram Goodhue, who is best known in New York for his church architecture.

Goodhue employed Lawrie on almost all of his commissions. Even in Rockefeller Center, the cathedral of Capitalism, Lawrie couldn't escape the profane.

The walk up a few blocks to 53rd and Fifth Avenue offers the other end of Lawrie's work.

While most tourists are taken by St. Patrick's Cathedral just across from Rockefeller Center, they're missing the real sacred gem of the avenue. (For the best of Renwick's work, skip St. Patrick's for the Grace Church on Broadway. Take the tram to Roosevelt Island for a glimpse of his two ruined asylums and still extant lighthouse.) 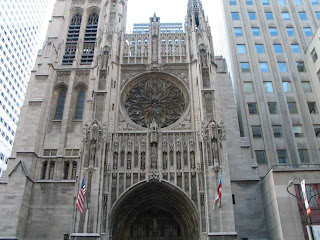 Saint Thomas' Episcopal Church is as Gothic as you get in New York City without heavy eye make up.

This is Goodhue's Gothic high point. He evolved into an extraordinarily interesting architect (that's for another post), but here he was working to outdo his old master's work down the block.

Lawrie's dominating sculpture are what makes this building special. 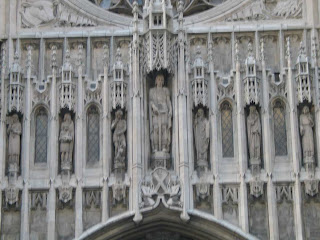 Of course, all of these sculptures have a story and a meaning behind them. 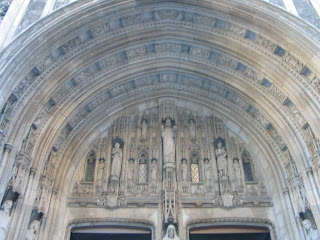 St. Thomas' showcases some of the finest Gothic work in America, just a few blocks north of some of the world's great Art Deco.

Brilliant artists can be brilliant in many forms. 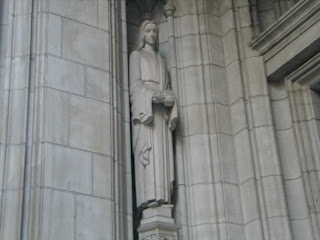 Sometimes, if the elongated body and angular features of this saint are any proof, they tip their hand a little and we can divine the progression of their senses.
Posted by roconnor at 3:49 PM

Great post... can you actually go in the asylums out on Roosevelt Island?

The one on the South End of the island is the only "ruins" in New York City -like the ruins you'd find in Rome or Athens. Those are off limits.

The Octagon -which Dickens visited in 1841 (which makes me think it wasn't a Renwick building after all, I'll have to check the AIA Guide) is, surprisingly, converted to luxury condominiums.

No word on when riverview apartments in the Lighthouse go up for sale.

Cowardly they erased Diego Rivera's stupendous murals in the Rockefellah.

Did some sleuth-ing... Seems the Octogan was designed by Alexander Jackson Davis. The Strecker Laboratory looks cool too... looks like I've figured out my next day-trip!

To be fair, Rockefeller was well within bounds to stop Rivera's mural from being finished.

He didn't want Lenin portrayed in the building.

The vast majority of America saw Lenin as a villain even at the height of the Depression. Rivera's willful inclusion of the dictator had no place in the mural -it was there to "push buttons".

Rivera, himself, was too cowardly to reach a compromise with his employer -something we have all had to do on commissioned jobs and replace the likeness.

At least Rivera got paid in full.

Yes, truly. Paying in full resolves all the problems. They knew well in advance what Rivera was going to do. The saw the maquettes. Like when Hollywood approached Eisenstein to direct Dreiser's "An American Tragedy".They knew what Einsenstein have done before. For the Rockefellah it would have been better if they've asked Arno Breker, who was more suited to the American spirit of that age.

I'm glad that I don't have to look up and see Lenin's face in Rockefeller Center.

Democracy lives by compromise, which Rivera- like Lenin, was unwilling to make.

He should've taken his patron's advice. The mural would have been one hundred times greater without the face of a dictator who spoiled a people's revolution.