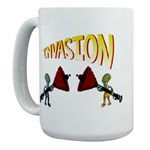 A little while back we worked with Steve Kerper to create a bunch of pieces for MyDamnChannel.

One was a series of live action bits with pan and scan storybook illustration. We got to use some fun illustration on those bits. I did a poor job photographing the live, but they're cut O.K.

That was a case of multiple rounds of editing with Steve and Brian. That's the toughest sort of edit -when a few people are throwing out ideas. They may all be "good" ideas, but you can't execute them all at once. Then, on the other hand, there are some ideas you instinctively know will not work but are obligated to try.

In any case, we also did three animated bits.

You can collect fabulous merchandise here. 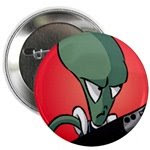 The spaceship was made in Maya, the characters animated in Flash, compositing in After Effects. Here's a case where Flash allowed us to create "better" animation. The animation short cuts are the same that would be used in a low budget Oxberry stand shoot -the girl's arms reaching across frame is a pan cel, for example. We timed holds and added flourishes in the same manner any drawn film would be done -except the drawing was done with a tablet.

This leads to some art production that I'm not crazy about. The line work doesn't have the finesse or control that I'd like. Time constraints of producing on a budget are more responsible for this than anything inescapable in the Flash production process.

Ultimately, these films work because of the sound design. JZ Barrell did the music and sound effects.
Posted by roconnor at 11:14 AM

Once I was abducted by RED martians.