Who didn't love the "Double Shot" or the "Two for Tuesday" sets on classic FM radio?

At the very least you'd be guaranteed two songs in a row without commercial interruption. If it was a band you didn't like, you could safely tune out for five minutes and if it was -well, isn't that what washing the car on the weekend or playing cards in the back yard is all about?

TOMORROW, Friday September 12th 2008 we're going to have work featured in not just one -but two, yes two, fancy establishments of art showing.

First The Society of Illustrators is opening Politics 2008. 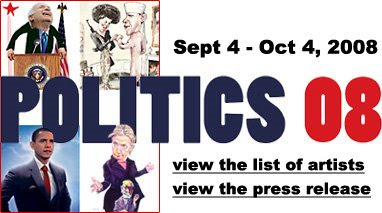 This will feature several of our "Naked Campaign" pieces for The New Yorker, as well as original art from the series -including a three foot inflatable globe with John McCain painted into it.

Moving downtown, The Museum of Comic and Cartoon Art (MoCCA) will be hosting a retrospective on Kim Deitch.

We did a short film with him for They Might Be Giants a couple years back. It'll be showing along with a promotional film John Kuramoto made for "Boulevard of Broken Dreams" and a five minute film he made with his brothers and Tony Eastman when they were toddlers.
Posted by roconnor at 2:31 PM