The Last Days of Coney Island

The animation industry is loaded with coaster enthusiasts and sentimental folks who think the bygone of days of childhood were infinitely more magical than the grown-up here-and-now.

This weekend the crocodiles shed another tear as Coney Island's "Astroland" closed down for what looks to be the last time.

(above) No tickets here.

I'm not going wail over the "great loss" of "national treasure". I go to Coney Island two or three times a year, and honestly, I think the community and the beach will be better without the low rent, beaten down attractions.

Attractions like the "Topspin" are "fun" for their kitsch value and little more. Exchange the airbrushed Hulk Hogan for a perfectly rendered Donald Duck -how much charm does it hold? Is it something worth saving? 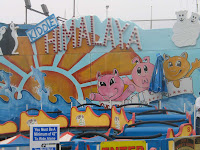 The rides in Astroland -like the Himalaya (above) or the Break Dance -played loud, joyless "dance" music. The decorations were fun (in a kitschy way). The evil pink creatures and their orange sidekick -godless offspring of jungle beasts and Japanese children's cartoons -even they don't seem to enjoy the amusements. 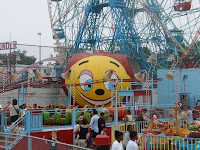 Astroland had a weirdness that sometimes went beyond kitsch- the giant apple face overlooks the kiddie caterpillar ride. There's clearly an "Alice in Wonderland" inspiration here, the scale of it much more pleasing than an overblown Disneyland attraction.

Note: The Wonder Wheel lurking in the background is landmarked and will continue to operate.

(above) The world would be better with trashcans like this on every corner.

When I was child in North East Philadelphia, the athletic club would sponsor a traveling carnival. It towed a dozen or so rides, scary shacks, dart games onto the ball fields bringing with them a visceral, palpable excitement. Here was something new come into our world, here was the chance to meet kids from half a mile away, the opportunity to cross paths with exotic strangers. All of the swing rides and coin pushes never added to half the fun that the mere anticipation of the carnival held. 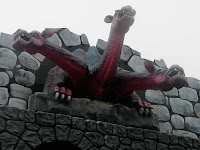 (above) The Hydra from the scary house.

After Astroland is gone, luxury condos will most likely rise in its place. That's the way of New York City.

Maybe that'll clean up the beach -which is riddled with broken glass, soda cups, and the litter of sad-sack junkies.

Maybe the razing of Astroland will spark the revival of Coney Island as destination for middle-class New Yorkers who don't want to walk through grime and carnies to bring their kids to a public beach.

The rest of the city should adopt the signage of the "hoop shoot hustlers" of Astroland. 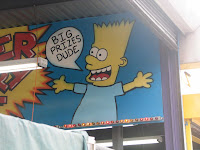 For many years Abetta, a garage on E. 1st Street and First Avenue in Manhattan had a sorry spray paint mural of Bart Simpson wearing a welding mask saying "Boiler Man, Dude!". It was great piece of urban color. Where was the outrage when 5 star restaurants and high priced apartments made him disappear?

* deference to Ralph Bakshi, whose film I hope transcends the undue sentimentality twentysomethings and other post-Baby Boomers have towards an amusement park that they never visited.
Posted by roconnor at 11:32 AM

Try "pantaloon jumpers" or "parachute jumpers", it's probably one of those.