Trees! or The Longest Entry Yet!

We've done several projects with rock-n-roll übergroup "They Might Be Giants" starting with a film to the song "Dr. Worm" for Nickelodeon's Ka-Blam! all the way back in the 20th Century.

Most of them are pretty lousy, but two count as the only two pieces we've done that I actually like.

The recent Kim Deitch show at MoCCA reminded me how, a couple years back we were asked to do some work for They Might Be Giants Venue Songs DVD. They sent us the "Yes"-inspired track and asked for our thoughts.

We didn't want to go the Roger Dean direction (although looking at his work now I can see the merit of that approach -the work doesn't strike the pace we were looking for). But we wanted to keep it kind of trippy and kind of make a nod to the early 70s and most of all make it possible to produce for the pack of bubble gum and ball of rubber bands we were getting paid with.

So I called up Kim Deitch and pleaded our case. I drew up a really crappy storyboard and went to visit him with our reel and a basket of good intentions. Surprisingly he agreed to do it -with minimal conditions. 1) he got to keep any artwork he created -no problem 2) he drew the storyboard -even better.

Next we had to find an animator. The plan was to have Tony Eastman do it. Tony and Kim were childhood friends -both of their fathers were instrumental figures in UPA's heyday. So I was gambling on that to get him to do it for a couple sticks of bubble gum. But Tony's a smart guy and he knew how much work it would be and had much better things to do with his time.

So I called up Suzan Pitt and asked for recommendations. There was a scene in El Doctor that had a few dozen babies bouncing all over with the sort of rubber hose-inspired animation that Kim Deitch's "Waldo the Cat" asked for. That animator, Gerard Goulet, turns out to have also done the rubber hose ladies of Triplettes of Belleville, and all of the pigeons in "The Old Lady and the Pigeons".

(above) Gerard was the AD on Triplettes of Belleville and animated the rubber hose stuff.

He was more than happy to help out. But he lives in Montreal and a Chinatown bus ride would wipe up most of the budget, so we worked remotely. I sent him model packs, layouts, timed exposure sheets, etc. Pretty much the same as working with Tony from his Connecticut home, or Doug Compton in New Jersey, or Tissa David on the Upper East Side.

About six weeks later he sends the animation keys back. The work was rougher than I'm used to with maybe 5 inbetweens or more between some drawings (working with guys like Ed Smith really spoil a producer), but the animation was so nice and the camera in the first scene especially was so complex I was amazed anyone could do it. 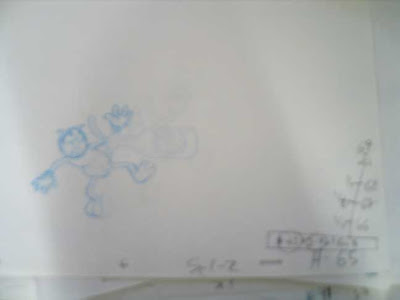 (above) rough on Waldo

The assistants were Winnie Tom, Valerie Lisyansky, Christina Capozzi and Karen Squillaro. They inbetweened, did clean up, and helped out with the painting. 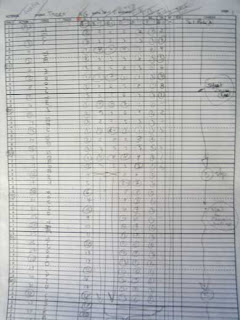 (above) Try giving this to a kid out of art school to figure out.

I did the compositing. 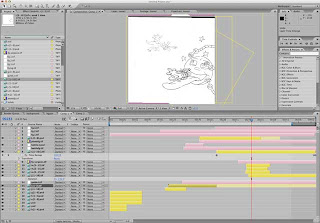 I tell people there are always a few ways to solve any problem or methodologies for getting something done. In reality, there's only one good way to composite drawn animation in AfterEffects.

Each drawing should stay its own file. If you have a sequence of drawings on the A level that run from 1 to 10 you'll should have 10 files in the folder named "A level". Do not, oh do not, combine them all into one file -unless you like to make an easy job difficult and potentially compromise the quality of your film.

Apart from technical reasons (file corruptablity, possible registration issues, simplicity of editing images/replacing/ignoring bad drawings, etc.) you're making a cartoon. The process should replicate the cel animation process as much as possible. Each "cel" should "exist" on its own.

You've got your "A level". Import it into AfterEffects as a sequence. Make sure your frame rate interpretation is the same as your composition. Drag the sequence into the composition.

Now you have one "piece of art" in the timeline for the entire "cel level". Use time remapping to sequence the art according to the exposure sheet. In many cases this becomes simple data entry. Frame 10 on the sheets calls for drawing 5 -go to frame 10 in the composition and type in 5. You can simplify this using linear keyframes (key drawing 1 on frame 1 and drawing 5 on frame 10 -voila! You're on twos!) or you can keyframe every frame on a hold if its a complicated exposure.

Repeat for every cel level.

I'll also make a composition called "build" or something. Here, it's just comp 1. This is the full raster size of the largest piece of art. That allows you to see everything while compositing.

After that, make a new composition, drag "build" into it, and set your framing and camera moves. Of course, you'll need to vary this if you're doing multiplane moves or anything that's not traditional drawn animation.
Posted by roconnor at 10:53 AM

HI Richard! I get these "google alerts" when my name is mentioned- thus I saw your post about Gerard. Looks like you are doing well! Nice to hear about you!
sending a hug having to do with Troubles...
Suzan
suzanpitt@earthlink.net

"Try giving this to a kid out of art school to figure out."

I have trouble convincing my students why they even need to use hand-written paper exposure sheets . I just tell 'em to trust me on that one and they'll eventually get it . They all want to just sort of time out their drawings on a Flash timeline by trial & error and hope for the best. I tell them, yeah whatever ... if that's the type of stuff you want to fritter away your time on, but if you want to learn classical animation from me then you're going to learn how to do it the classical way . (and save time because you've planned out everything carefully on an X-sheet)

In Eric Goldberg's recent book "Character Animation Crash Course" he makes the case for continuing to use paper X-sheets and why they ought not to go the way of the Oxberry camera even in these days of Cintiq tablets and Flashy Toonboomery .

(and I write this as someone who loves my Cintiq tablet and I do not at all miss the tedium of painting cels or the hours spent shooting them on an Oxberry ... so I'm not coming from the perspective of an Animation Luddite. )