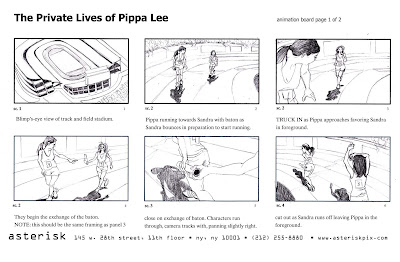 After agreeing to produce the segment we got on the phone with the film's director, Rebecca Miller, and the character designer, Leah Tinari.

We discussed the action and the timing. Leah drew up this storyboard (there's another which contains few more gestures and a scene which was ultimately cut).

She hadn't done a storyboard before, so she came into the studio and we looked at some old boards together and we gave her the blank forms and talked about what each shot should be. As you can see in the typeset board panel 4 is a jump, so we noted to keep the same framing as shot 2.

Shot 2 is a dynamic and difficult scene to animate. The foreground character, Winona Ryder, begins in place but not on a hold -she's bobbing in anticipation. The other character, Robyn Wright Penn approaches from the distance animating forward in perspective. At one point Winona runs towards camera and the background begins to animate back in perspective.

One thing made it a little simpler, the action moved in a continuous direction. This makes the art production harder (more paintings to make) but can make the brainwork of animation easier. It's essentially straight ahead.

Here's the pencil test for Winona in scene two.

This is with inbetweening and shadowing. 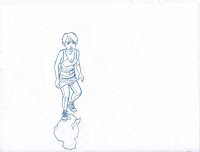 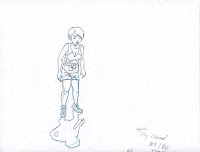 above: B4 (head moves, anticipating body action. Back leg stiffens.) 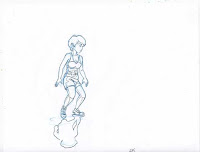 above: B7 (pivot on back foot, full anticipation) 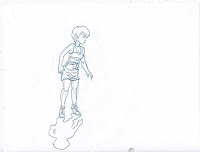 above: B10 (here's an "extreme", Winona reaches her peak height) 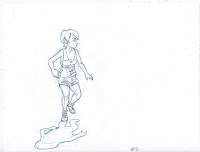 above: B13 (BOOM! to quote John Madden. She begins forward -note the weight on the front foot)

above:B16 (rest of the body follows through. Hips at axis.)

The charts are cut off from the scans. Here Doug has left two in betweens. He's charted them so the assistant can easily follow through on the direction of the movement.

Winona is coming forward, so the eases in the animation are built into the in betweens. There's often a half -a inbetween directly in the middle of the two keys, and then a third between the first key and the middle drawing, sometimes even a drawing between them.

Another thing that Doug does which is helpful to assistants and makes for better action is to blue line "C/D"s (complete drawings). 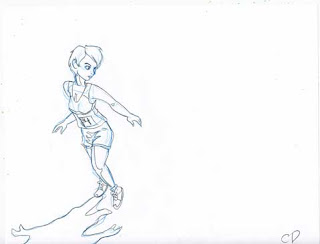 B18 is not a key, but a few important parts of the character were drawn and the rest blocked in loosely with blue. Note the "CD" mark on the lower right hand side.

Also note, the exposure sheets for this are extremely simple. 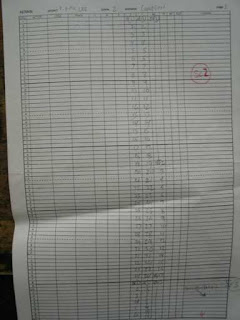 The clean up work was particularly difficult. These aren't caricatures, they're portraits -that makes drawing the likenesses tricky. On top of that they're scaling up and moving in perspective so that every drawing is slightly different.

With a cartoon, this action isn't much of a problem - a little distortion in a couple drawings will go unnoticed and may even "improve" the animation. Not so here. A little distortion could turn a beautiful actress into a full color monster.

Of the two, Winona proved a little easier. Her features are bigger and rounder. For Robyn we took several different tactics and wound up spending almost two weeks just figuring out how to get her right.

Then came the problem of painting. Here's basically how we did it.

Each one of these steps was essentially "by hand", but using Photoshop. 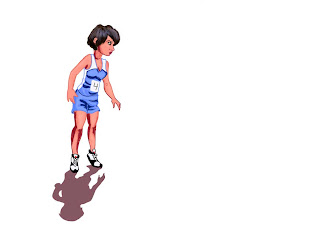 In motion, the painting resembles Leah's original work. I wish we had the resources to devote the energy to getting it perfect, but as it stands it's not terrible.

The film is finishing up post production now, and should be in theaters early next year.
Posted by roconnor at 6:41 AM