Several months back we got a call from a live action production company looking for a ballpark quote on twenty seconds of animation for a feature film.

They already had an illustration style in mind and directed us to the artist's website.

"Oh boy, that'll be tough," I thought, as my pupils rolled into dollar signs. I called back with a reasonable quote -around what our segment for The Stepford Wives cost. This would be shorter with no compositing (which always allows for higher billing) but monumentally more difficult to produce. Even though it's an "indie" film, its a difficult bit.

The illustrator, Leah Tinari, had created the cover for the British edition of the book. The director loved it and wanted somehow to incorporate it into the film. 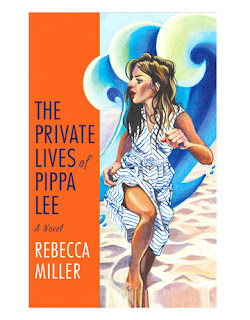 In addition to the website, they also sent us the entire script of the film and a few publicity one-sheets. Even though the animation took up only two paragraphs of the 120-some pages they sent us the whole thing.

I can't overstate how much easier that makes creating the animation. It was also a very interesting script.

Gail Levin (who we do a lot work with) had dealt with the writer/director Rebecca Miller while Gail was making the "Great Performances" film on The Misfits. The John Huston film was written by Rebecca's father, Arthur Miller. Gail saw the one-sheet while on my desk while we were cutting and offered up what a pleasure it was to deal with Rebecca.

With all of that circling through my head, we agreed to make the piece even though they had only budgeted -no exaggeration - 5%, that's FIVE PER CENT, of what the animation should be.

We consented to offer our services, essentially, for free. I wonder if any of the actors would do the same thing? Or the lab? Or the electricians? Actually, its more like we would be paying for the a little part of the film. I wonder if we can get Executive Producer credits?

Although I joke about the budget, it's a credit to the crew of Pippa Lee that the only time I mentioned -or even felt the urge to mention -the puny and insulting budget was the first time they told us what they could spend. Sometimes there are factors that drive you to produce a job despite impossible budgets. Maybe it's the opportunity to reach a new venue, or try a new style, or just to stay busy. In this case, it was sort of a gut feeling -the script was beautiful and compelling. The "clients" were gracious and intelligent.

All of those factors make working on a project like this far more rewarding than a project with 20 times the money managed by insufferable creeps.
Posted by roconnor at 4:06 AM