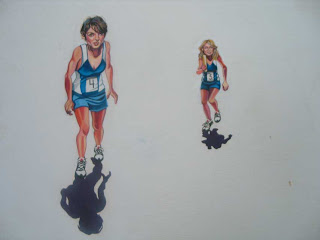 Q. How can you produce complicated animation on an invisible budget?

1) Pass on as many costs as possible. "Pippa Lee" was providing the illustrator, so we made sure her fee was outside of our budget.

Our relationship with Leah was the same as if she was on our payroll (and hopefully we can hire her to work on a future project), her checks came from someone else. Because of this, we pressed her for more artwork than we typically would ask from an illustrator who hasn't previously worked in animation -a couple painted positions for every scene, production backgrounds, etc.

It turns out we probably would've needed all that material from her anyway. Her illustration style is very peculiar and we wanted to capture her "eye" as much as possible. Regardless, the plan was to bilk her for everything we could. 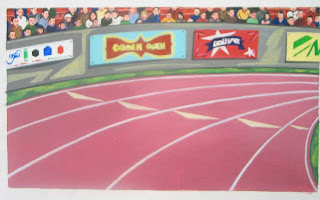 above: background. We lashed Leah repeatedly until she painted this. We berated her to do it again to different specs. We dripped boiling water on the back of her neck to work faster.

Also, we pushed all of the lab/post production costs onto the production company. For a theatrical features these costs can be extraordinarily high. The post work for twenty seconds can easy come to a few thousand dollars since the length falls well short of lab minimums.

Often you can bill messengers and FedEx directly to the client account. We had them agree to this. We didn't take them up on it, everything was done online. The only thing requiring a messenger was the final delivery which I took to Technicolor personally.

2) Spend in the right places. What's the most important of the project? In this case it's two fold: art production and animation. The art production would be difficult, but I was foolishly confident I could figure it out and plow through it mostly by myself.

The animation, on the other hand, had to be solid.

The Pippa producer brought up Flash in our initial conversations. After reading the script and study the illustration style I haughtily discarded the notion. I didn't even bother explaining it to them, just saying "You can't do this in Flash, not if you want it look anything like Leah's painting or move with a more than a modicum of realistic fluidity." (That may be a direct quote. Note how I "haughtily" dismissed their idea. Sometimes I actually talk like this, especially when trying to bully someone.)

The best guy I knew for the job was Doug Compton. Not only is Doug a first rate animator, we've worked with him for a long time and on a lot of projects. Familiarity plays a big part in making things on the cheap.

More than familiarity, his strengths as animator played into the needs for this sequence. He has good draughtsmanship, especially in the human figure. He can animate dynamic action and character.

On top of that, Doug works very cleanly and is extremely orderly. He'll draw more keys per shot than most any other animator, and even most of the breakdowns. He also has the habit of blue lining certain inbetweens or breakdowns and making them C/Ds (shorthand to assistant to "complete drawing"). His exposure sheets are clear and he charts inbetweens with simple precision.

Basically, he's the guy to turn to if you're going to have amateurs fill in at other positions.

3) Only test when necessary.

John Hubley never pencil tested any of his work for Children's Television Workshop -couldn't afforded. Besides, he was brilliant and he had Tissa David animating.

In our case, Leah Tinari is a brilliant woman and Doug Compton was animating.

We did do a pencil test, but didn't dawdle over it.

We didn't spend weeks and weeks doing pose tests and style tests and character rotations and all that stuff. Sure, all those things are useful. But they're also expensive.

4) Fill in your crew with amateurs to support the professionals.

If you've got animator who knows what they're doing, 75% of your worries are over. You'll have a decent enough piece, all things considered.

On this project, we had the luxury of time (another side effect of working for decent people). Most of the assistant work -the inbetweening, clean up, and highlighting was done by a couple of my students: Kristin Collins and Noella Borie.

Both had just a year or so of animation classes, very little experience with drawn animation and none in the traditional studio assembly line.

Both have good drawing skills and both are smart and hard working.

It turned out to be (almost) a fair exchange. We invested time in teaching them how animation is done. They learned more about filmmaking in the weeks spent working on this project than they will in four years of art school. 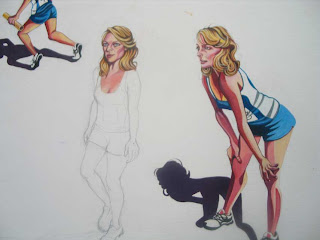 5) Plan your production methodology. Animation is a process. You do lots of drawings, color 'em in, get 'em on film or tape.

The details of that process vary with every job. For this film we broke the process down into two groups with several steps.

I. Animation. This consisted of the following:
a) layout. These were done, basically, by Leah. I reworked them some for animation. I knew they weren't "good" layouts, but I also knew Doug had dealt with worse.
b) animation. We'd give Doug the scene timing, he'd do the rest.
c) inbetweening.
d) clean up. With some illustration styles you can just take the animator's drawings and color them in. Not here. We knew we'd have work these extensively to get them right.
e) highlight/shadow animation. A lot of the time, we'll just do this in Post-Production or follow through painting them in Art Production. Too complex to leave until later.

II) Art Production
a) scanning. DUH!, right? When you've hundreds of drawings to scan at film resolution, scanning is a big part of your pipeline.
b) cel preparation/file processing. Let the machines get things ready for you to paint.
c) opaquing. Basic filling flat colors.
d) self/colored lining.
e) shadow/highlight passing.
f) hair. I didn't know how to paint this, so left it for last in hopes of inspiration.
g) AfterEffects camera.

That was the plan, and for the most part we followed it. Not too strictly, the most important thing about producing decent work cheaply: be flexible with your plan.

Next time: some animation drawings.
Posted by roconnor at 4:46 AM