Theater has a strange kinship to animation.  Not just the 90s Disney connection, or the regular crossover of voice talent from Broadway to the v. o. booth but both share approaches to performance, clarity in staging, and ways of conveying ideas through gestures.
Both are also crafts which require contributions from tradesmen of different skills to succeed.
Here are some illustrations from Caspar Neher who was best known as Bertolt Brecht's designer.  He also wrote the libretto for Kurt Weill's "Die Burgschaft" and led the colorful life of a professional artist against the early 20th Century backdrop of Germany. 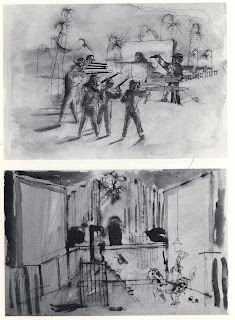 Above: Top "The Execution of Galy Gay" from 1928 production of "Mann is Mann"
Bottom Final scene "Die Dreigroschenoper"
These are taken from John Willett's "Caspar Neher: Brecht's Designer" (which I'm happy to see available, cheap, in limited quantity on Amazon -it's prized book). 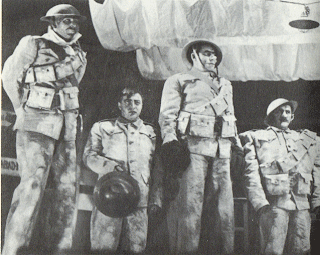 Here's a photo from that production (scanned from "Brecht on Theater").

You can't miss Peter Lorre as Gaily Gay, helmet in hand.  This was the role that "broke" him.  He soon went on to star in Fritz Lang's "M" and make cinema history.

Both Lorre and Neher remained close with Brecht and were later subjects of poems by the writer: Neher during the post-war German period on his ability to make the cheapest materials look rich, Lorre in "The Swamp" a touching piece from Brecht's stay in Hollywood about the actor's descent into addiction.   Both of these were written at times when the poet was at the height of his skills, even if his acclaim (and box office) were at their nadir. 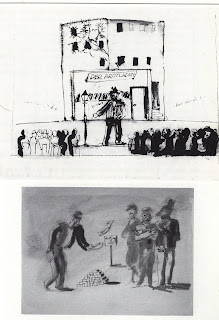 Above: Two scenes from Brecht's uncompleted "The Breadshop" 1929-1933
The looseness of the line and the watercolor wash is very exciting.

The style is related to other Weimar artists -Grosz, Dix, Beckmann, Heartfield. 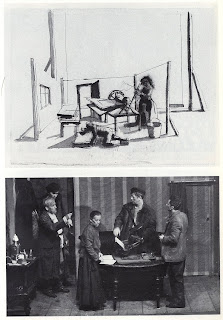 Above: Top design for "The Mother" 1932.  Bottom, photo from 1951 Berliner Ensemble production
There's a practicality to set design -much like animation.  The artist always has to think "will it work in space".  Other expressions of drawing don't necessarily hold this constraint. 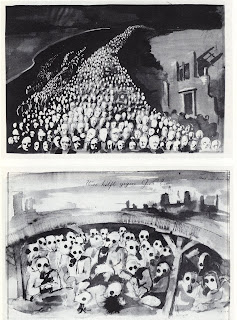 Above: Projections from 1947 production of "Fear and Misery in the Third Reich"
One of the innovations of Brecht's theater was the integration of "mixed media" onto the stage.  This included projections (whose use had been made prominent by Erwin Piscator).
Posted by roconnor at 6:09 AM

Excellent post. Many thanks for directing me to the book.